Vizag RTA to use advanced technology to test learners 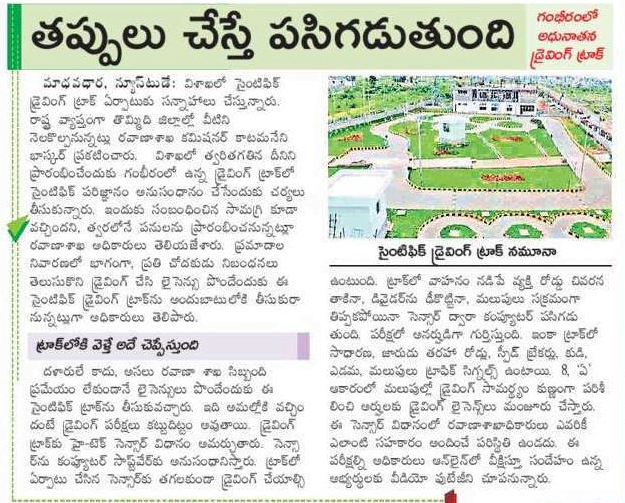 In Visakhapatnam, plans are being made to build a scientific driving track. According to Transport Commissioner Katamane Bhaskar, these will be built up in nine districts across the state. Steps have been conducted to incorporate scientific information into the serious driving track in order to debut it in Visakhapatnam as soon as possible.

The equipment has also arrived, according to transportation officials, and construction will begin soon. The authorities stated that this scientific driving circuit will be made available to every driver in order for them to learn the rules and obtain a driver’s licence.

This scientific route was established in order to obtain licences without the assistance of actual transportation department personnel, not only agents. Driving exams will be required as soon as the law takes effect. The track is equipped with a high-tech sensor system for driving. The computer software is linked to the sensor. Driving should be done without coming into contact with the track’s sensor.

The computer can identify the sensor if the driver of the vehicle on the track touches the end of the road, hits a divider, or makes an erroneous turn. Recognizes examination disqualification. Normal, slick roads, speed breakers, and right, left, and turn traffic signals are also on the track.

Driving licences are awarded to eligible individuals after a thorough examination of their ability to drive in ‘A’ shaped turns. There will be no situation where any authorities from the transportation department will participate in the censorship process. Officials will watch the test online and present video footage to any candidates who are sceptical.