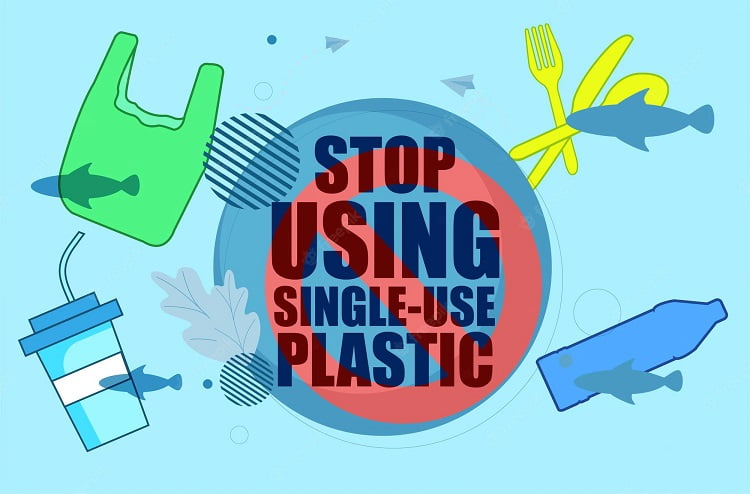 According to the Ministry of Environment, Forest and Climate Change, the Central Pollution Control Board has taken thorough efforts to implement India’s pledge to ban designated single-use plastic items by June 30, 2022.

The Central Pollution Control Board (CPCB) has taken a multi-pronged approach to banning single-use plastics that have been found.

Sachets constructed of plastic material used for storing, packing, or selling gutkha, tobacco, or pan masala are forbidden under the Plastic Waste Management (PWM) Rules of 2016.

The PWM (Amended) Rules, 2021, prohibit the manufacturing, import, stocking, distribution, sale, and use of carry bags made of virgin or recycled plastic smaller than seventy-five microns, taking effect from September 30, 2021, as opposed to the fifty microns proposed earlier under the PWM Rules, 2016.

Additionally, with effect from July 1, 2022, the Ministry of Environment, Forest and Climate Change said in a statement that the notification of August 12, 2021 prohibits the manufacture, import, stocking, distribution, sale, and use of several identified single-use plastic items that have low utility and high littering potential.

National, state, and local directives have been issued to limit the supply of selected items. According to the ministry, all major petrochemical companies would no longer supply plastic raw materials to companies engaged in banned SUP production.

SPCB/PCCs have also been given orders to change or cancel authorization to operate issued under the Air/Water Act to businesses who generate illegal SUP. Customs officials have sought the importation of restricted SUP products.

Enabling steps for promoting alternatives to SUP are being actively pursued as an alternative to the existing supply. Around 200 biodegradable plastic firms have already received one-time certificates from the CPCB.

These certificates do not need to be renewed, which is in keeping with the government’s ease-of-doing-business strategy. In addition, an online portal has been created to make certification of these producers easier.

CPCB, in collaboration with CIPET, is hosting workshops for MSMEs across the country to help them migrate to alternatives to SUP. Ranchi, Guwahati, and Madurai each hosted one of these workshops. In conjunction with leading technical institutes such as IISc and CIPET, the development of alternatives to petro-based plastics is also being researched.

SPCBs and local governments are sponsoring large-scale awareness drives with the participation of all citizens – students, voluntary organisations, self-help groups, local NGOs/CSOs, RWAs, market associations, business entities, and so on – to urge citizens to participate in the initiatives.

Previously, the CPCB conducted surprise inspections of Gutkha / Pan Masala production plants across the country to check for the use of plastic in their product packaging.