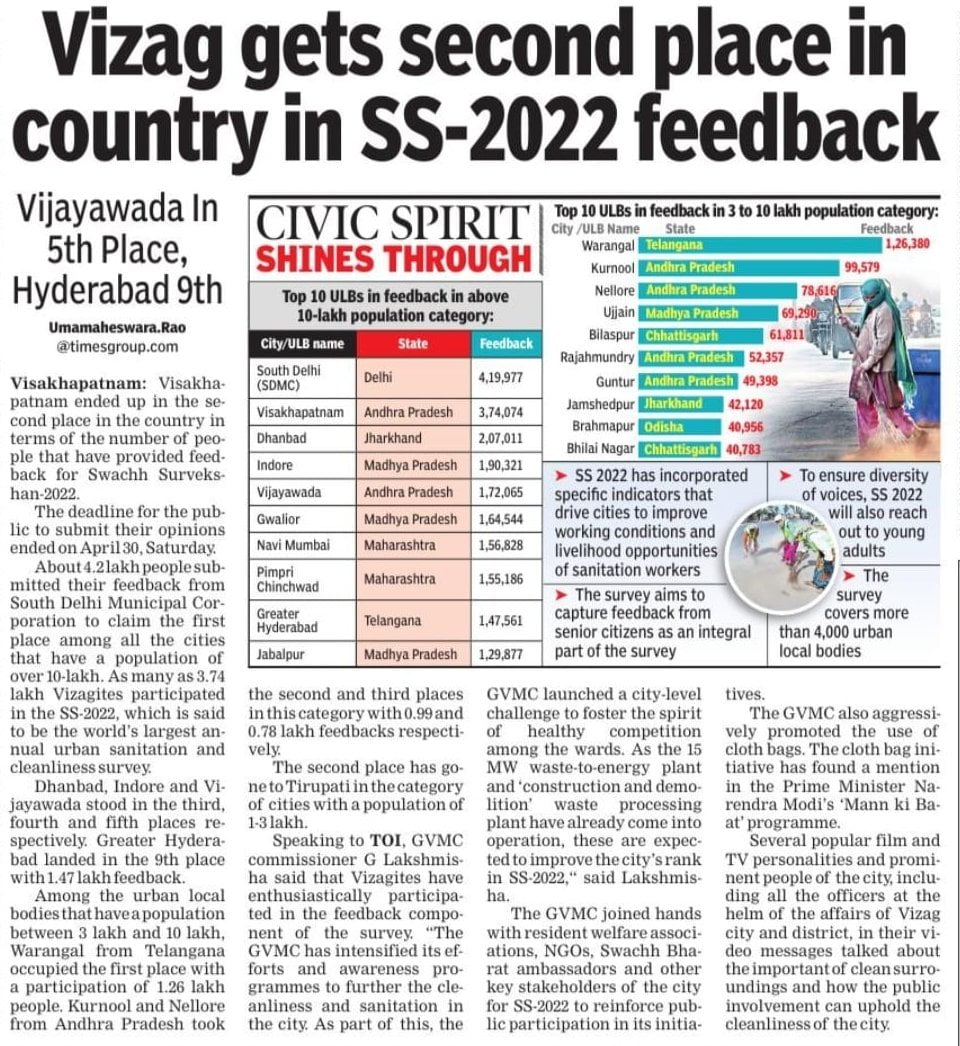 In the Swachh Survekshan-2022 survey’s ‘citizen input’ category, Visakhapatnam came in second, only behind South Delhi. Officials described it as a “decent show,” but noted that network issues affected the city’s performance over the last two days.

South Delhi topped the way with 4,19,977 citizen feedbacks, followed by Vizag with 3,74,074 feedbacks, among the top 15 Urban Local Bodies (ULBs) with a population of over 10 lakh.

Since 2016, the Ministry of Housing and Urban Affairs has conducted Swachh Survekshan. It is the largest survey of urban sanitation and cleanliness in the world. Its main purpose is to stimulate widespread citizen participation and raise awareness among all segments of society about the significance of working together to improve the quality of life in towns and cities.

KSLG Sastry, the chief medical officer of the Greater Visakhapatnam Municipal Corporation, said the city did exceptionally well in the citizen input category. “Although the city is in a better place now, there is still opportunity for progress.” He went on to clarify that the garbage-free city accreditation determines the final decision.

“Most residents did not receive an OTP and those who did could not give comments owing to server difficulties,” the CMOH said of the technological challenges. “If these had been taken into account, we may have performed better,” he said, noting that the majority of individuals submitted feedback through the Swachhta App.

“If not for them, the city might have set a record by surpassing Delhi’s score,” the CMOH said, adding that technical difficulties further added to their woes. He stated that citizen participation has increased dramatically since the Swachh Survekshan was launched in 2016. According to the CMOH, it has raised public awareness of hygiene in the city.

The handling of municipal solid waste is used to rank cities. Toilets and open defecation-free zones are also taken into account. The total number of points awarded under these conditions is 7,500. Sastry stated that the city finished ninth last year and that they are hoping to do better this year because the Jindal waste to electricity plant will start functioning this year.

The Safai Suraksha challenge and certification as a garbage-free city are still in the works. The poll will most likely be completed by the end of the month, and the results will be announced three months later. He claimed Vizag’s natural beauty helped it achieve a better position, pointing that that the cleanest city, Indore, was slipping behind.