Visakhapatnam based techie makes a water drone to save people 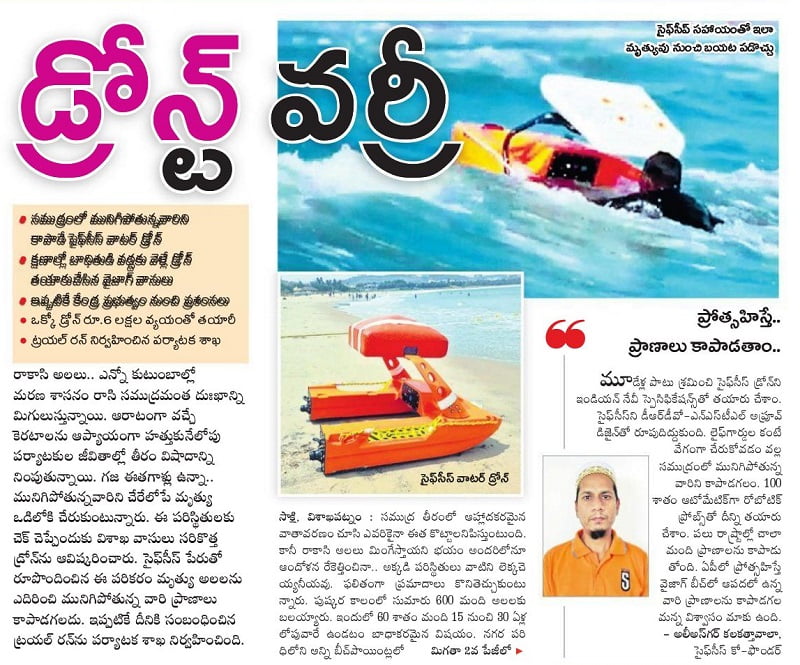 Seeing the pleasant weather on the beach makes anyone want to swim. But the fear that the tidal waves will engulf everyone is worrying .. The conditions there are incalculable. Accidents occur as a result.

During the Pushkar time, about 600 individuals were washed away. It’s a terrible fact that 60% of them are between the ages of 15 and 30. Many of the drowning survivors were recovered by lie guards stationed at various beach locations throughout the city.However, a small number of people die before the life guards go to those who are being washed away by the calm of the waves. To save such people, a team from Visakhapatnam made a drone called Saif Seas.

At sea, Machilipatnam, for example, is shallow. In the water near Goa, walk for about a kilometre.However, the depth of RK Beach in Visakhapatnam is greater than ten metres. The depth varies between two and three metres, particularly to the south and north of RK Beach.

This depth has been getting deeper and deeper in Peru with the effect of erosion over the years. Along with RK Beach, the sand is more loose along the depths near Bhimili, Rushikonda, Thotlakonda and Sagarnagar. Most of the sand slips away when the wave comes and goes. Failure to anticipate this can lead to slipping and slipping of the legs. These Syphilis drones are used to rescue those in danger at sea.

Lifeguards can often swim between one and two metres per second. If the tourist is drowning at a distance of 30 metres, the lifeguard will arrive in at least 25 seconds. These autonomous drones, on the other hand, can fly five times faster than a yard swimmer. It can cover 30 metres in 5 to 6 seconds and save the victim.

That is, it reacts seven times faster than the lifeguard.

Only one person can be rescued at a time by lifeguards. However, the Saif Sea can carry up to 200 kilograms and transport everyone to the shore.

It can break through waves at up to 15 kilometres per hour.

Remote control operation on the beach. These drones can be dispatched to the sinking in a matter of minutes.

It has a range of around 3 kilometres. In 90 minutes, the fully charged batteries may charge up to 80%. Once completely charged, operate for an hour. The standby mode lasts between 5 and 6 hours.

The 22kg drone has a strong grip that will keep it from slipping again. Each drone might cost as much as Rs 6 lakh.

It can be used as a control for up to 3 kilometres.

The Visakha team’s Saif Sea Drone has gotten amazing accolades from all throughout the state. Saif Seas, in particular, was shown at the Central Government ET Net’s Defence Expo. Prime Minister Modi was aware of the team’s accomplishments and praised them.The Saif Sea Drone, made by the Visakha team, has received rave reviews from all over the state. In particular, Saif Seas was exhibited at the Defence Expo organised by the Central Government. Prime Minister Modi was aware of its performance and congratulated the team members.

The state governments of Himachal Pradesh, Madhya Pradesh, Gujarat, Maharashtra and Rajasthan have already procured these for their tourism needs. State Tourism Department .. conducted the Syphilis Drone Trial a few months ago. Officials say the proposals have been sent to higher authorities by the state tourism department.