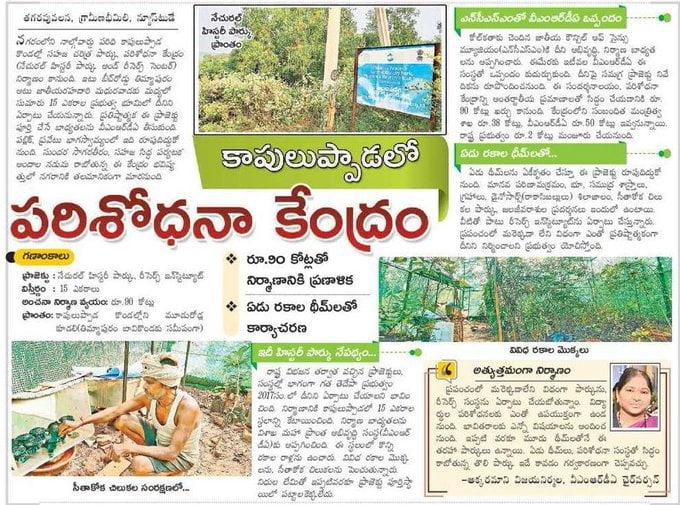 At the natural history park of Kapuluppada, Vizag’s 4th ward, a research centre (Natural History Park and Research Center) is being built. Between Bedar Road, Thimmapuram, and National Highway Madhurawada, it would be built on roughly 15 acres of government land.

VMRDA has taken on the responsibility of completing this ambitious project. Since it was formed in a public-private partnership. Amidst the beautiful beaches and natural beauty of the place, this center is set to become the capital of the city in the future.The projects that emerged after the state’s split, as part of the TDP government’s institutions in 2017, thought to put it up and granted 15 acres of land in Kapuluppada for construction. The Visakhapatnam Regional Development Authority has taken up the construction project (VMR OA).A variety of stones were set at this location. Plants and butterflies of various kinds are grown. The project has yet to be completed due to a lack of money.

The creation and building of the museum has been assigned to the National Council of Science Museum (NCSM) in Kolkata.VMRDA has recently signed an agreement with the company. A comprehensive project will focus on this.To equip the research centre to international standards, the institute will cost Rs 30 crore. VMRDA would receive Rs 50 crore from the appropriate ministry at the centre. A total of Rs. 2 crore has been set aside by the state government.

Seven themes have been incorporated into the project since its development. Planets, Earth, oceanography, and human evolution Dinosaurs (fossils), a butterfly park, and aquatic life displays are among the attractions. A research institute is also being established. The government intends to construct it with greater zeal than any other country.