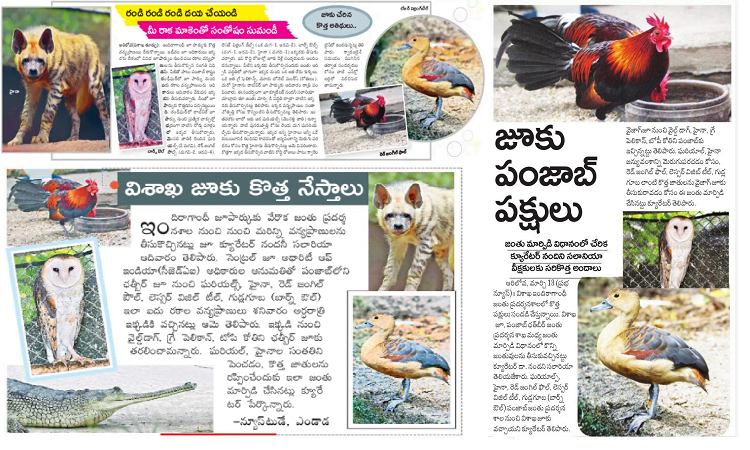 New animal species will soon greet visitors to the Indira Gandhi Zoological Park (IGZP). New animals have arrived at the zoo as part of an animal exchange initiative involving the IGZP and Punjab’s Chhatbir Zoo.

Two male gharials, one male hyena, two male red jungle fowls and four female red jungle fowls, one male Lesser whistling teal and two lesser whistling teals, and three barn owls, one female, were acquired from Chhatbir Zoo as part of the initiative, as per IGZP Curator Nandani Salaria. She stated the IGZP gave Chhatbir Zoo two bonnet macaques, a male and female wild dog, one male hyena, a grey pelican, and a male hyena. According to Nandani Salaria, the animals from Punjab arrived at the zoo early on Sunday.

Nandani Salaria noted, “This exchange intends to enhance the genetic lineage of gharial and hyena, as well as bring new species to the IGZP, such as red jungle fowl, barn owl, and lesser whistling teal.”

On Sunday, officials from the IGZP conducted an event called “Best out of waste” at the Bioscope, which is located on the zoo grounds, in celebration of the upcoming Global Recycling Day on March 18. This event drew over 250 NSS volunteers from Bullayya College. The goal of the programme, according to Ms. Nandani Salaria, was to create useable objects out of used/unusable plastic water bottles. This event was attended by Assistant Curator Uma Maheswari, the Zoo Education Team, and Zoo Volunteers.