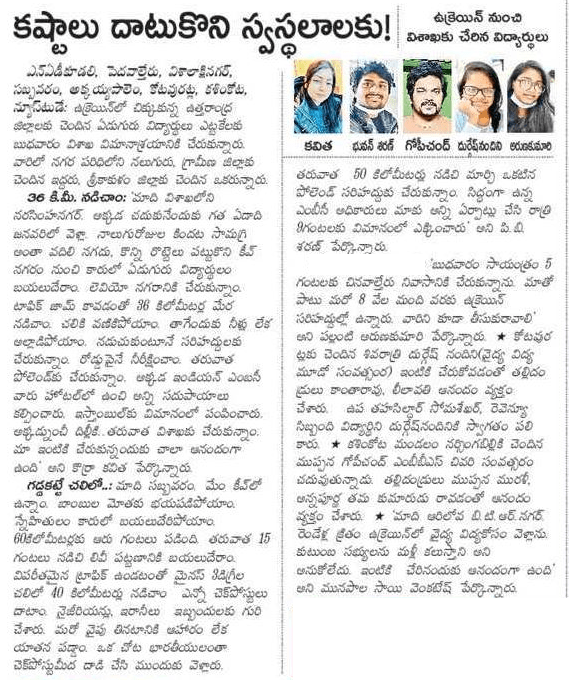 On Tuesday, Visakhapatnam’s Reddy Nomula Satya Sreeja and other Indian students who had been holed up in a bunker at Ukraine’s Kharkiv National Medical University (KNMU) for five days eventually emerged and boarded a train to Lviv, a distance of 1,017 kilometres.

Ms. Sreeja had sent an SOS message late Monday night, stating that the situation was deteriorating and that they could hear firing near their bunker.

“We don’t have anything to eat or drink.” Because there is no interaction, our parents are quite afraid of us. “Kharkiv and Hungary are 1,637 kilometres distant,” she claimed, adding that Poland is 1,403 kilometres apart and Romania is 1,283 kilometres.

Ms. Sreeja pleaded with Indian Embassy authorities to arrange for a bus or train to transport them to the border.

Ms. Sreeja, who is in her first year of medical school at KNMU, has been brave from the beginning of the war. She’d been calling her parents to reassure them that the situation in their area was not as severe, that she was secure in the bunker, and that the university authorities would take care of their food and water needs.

When the situation worsened on Sunday, Ms. Sreeja used her phone to record a video describing the issues she and other Indian students were having in the bunker, and she appealed to the Indian government for assistance. She spoke fearlessly on behalf of all the kids for 19 years.

Indian parents were concerned when satellite news stations broadcast live images of bombings in several towns across the war-torn country. The death of an Indian student from Karnataka, Naveen, in the shelling of Kharkiv added to the parents’ concerns.

“At 8 a.m., 24 of 48 Indian students, including Ms.Sreeja, took a train from Kharkiv to Lviv, and the same number of students were planning to board another train from Kharkiv to Lviv at lunchtime.” Ms. Sreeja’s father, Arjuna Rao, told reporters on Tuesday that Indian officials will provide them with food and drink, as well as bus transportation from Lviv to Poland or Hungary.

“The students are anticipated to arrive in Lviv on Wednesday early,” he says, adding that the journey to the border could take another four to five hours.