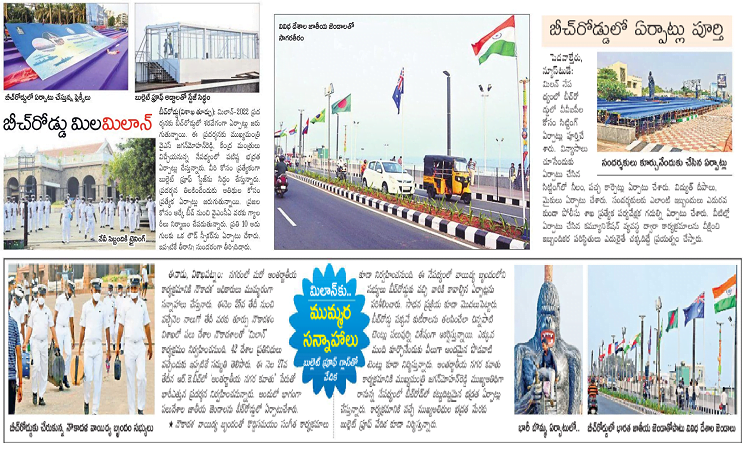 Visakhapatnam, the city of destiny, is gearing up for Milan 2022. The beach road is being prepared for MILAN-2022 by the organisers. Because state Chief Minister YS Jagan Mohan Reddy and central ministers are expected to attend, the city’s security has been enhanced. The delegates will be greeted by a bulletproof stage. For the prominent people, special arrangements are being made. Visitors to the event will be provided a galley from RK Beach to the YMCA. One loudspeaker is placed every 10 feet. The seashore has been beautifully organised.

Milan will be held in Vizag from February 25th to March 4th. This event is organised by the East Naval Forces in collaboration with the naval forces of various countries. Representatives from 42 nations were granted permission. A show called ‘International City Parade’ will be held on February 27th at RK Beach. A few countries’ flags are displayed on Beach Road as part of the event.

At the ceremony, musicians from the Naval Forces will put on a musical show. In this context, some musicians from the Naval Forces visited the location and inspected the arrangements. They’ve also begun rehearsing for the show. Visitors are drawn to the small tents that resemble small huts along the beach route. YS Jagan Mohan Reddy, the Chief Minister of Andhra Pradesh, will take part in the International City Parade.