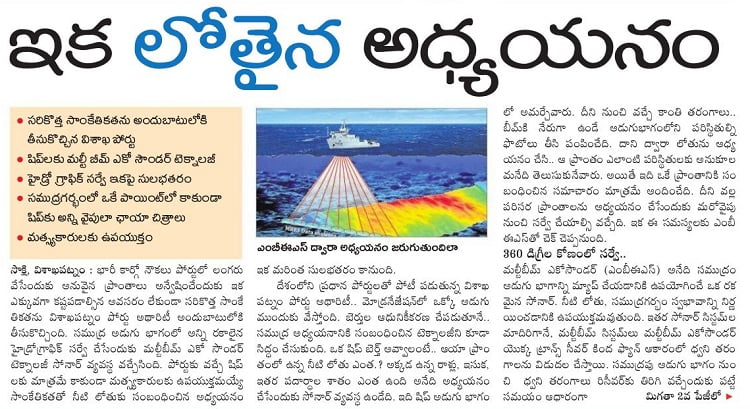 The Visakha Port Authority has implemented a new technology to make it easier to locate spots where heavy cargo ships can be anchored. A multibeam echo sounder sonar system has arrived to undertake surveys on various hydrographic undersea objects. This technology is used to explore the depths of the water. This technique aids in the research of water depths for anchoring not just for ships arriving at the port, but also for fishermen.

Visakha port, which has been competitive with other major ports in the country, has planned to modernise the port and is currently taking steps to do so.They must determine the depth of the sea, the quantity of rocks, sand, and other items in order to berth a ship at sea. A sonar system was utilised to locate these objects. At the ship’s bottom, this system will be installed. The system’s light waves will be directed to a beam, which will transmit photographs of the situation at the ship’s bottom. The depth of the sea may then be determined, as well as whether or not the situation is under control.

The reality is that this system previously only provided information for a single site. As a result, another survey was used to investigate the ship’s surroundings. MBES will now be used to solve this issue.

A Multi Beam Echo Sounder is a type of sonar used to survey the ocean’s bottom. The depth of the water and the behaviour of the submarine can be determined using this approach. Unlike the former system, which only covered zero degrees, this system can examine the depth of the water in 360 degrees.

Hydrographic survey activities have been easier to carry out after the introduction of new technology. Fishermen can benefit from this technology by determining the depth of the water, whether the location is ideal for fishing or not, and whether or not risk circumstances exist. Fishermen can only fish in acceptable spots because of this technology.

Nirmal survey vessel has been fitted with this latest technology. With this MBES technology, the port’s hydrographic survey will be enhanced. ‘This technology will be utilised to research the sea in and around Visakhapatnam,’ said K Rammohan Rao, Chairman of the Visakhapatnam Port Authority.