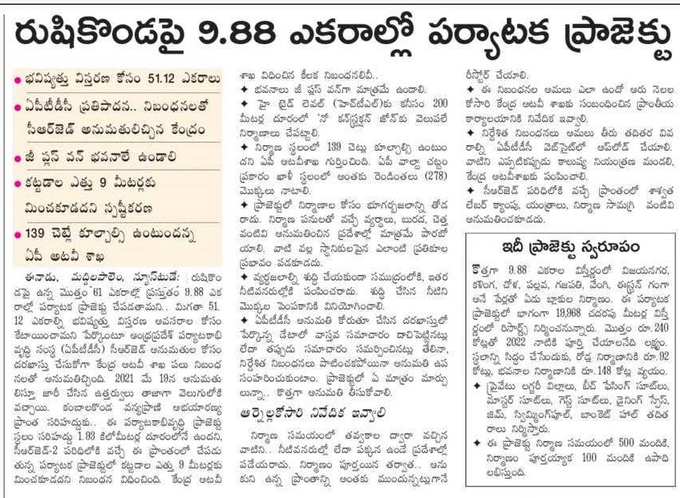 A tourism project would be implemented on 9.88 acres of the entire 61 acres in Rushikonda in Visakhapatnam. The remaining 51.12 acres have been set aside for future development. Orders from the 19th of May, 2021 have suddenly surfaced to the Kambalakonda Wildlife Sanctuary’s border.The site of this tourism development project is within 1.93 km of the CRZ-2 boundary, and the height of buildings in the tourism project being carried out in this area should not exceed 9 metres. The Central Forest Department has set some crucial requirements.

Only G Plus One buildings should be used.Construction shall take place at least 200 metres away from the High Tide Level, outside of the ‘No Construction Zone’ (HTL). At the building site, the AP Forest Department has selected 139 trees that will be uprooted. According to the AP Walta Act, the vacant space should be planted with twice as many plants (278).

Groundwater should not be used for the project’s construction. Construction waste, sludge, and trash should only be disposed of where permitted. They should have no negative consequences for the locals. Wastewater should not be dumped into the sea or other bodies of water without first being treated. Plant growing should be done with purified water. If the stipulated regulations are not followed, the licence will be cancelled if it is discovered that the true information in the data stated in the application for APTDC approval has been concealed or false information has been submitted. Any alterations to the project… It is necessary to seek new permission.

A report on those excavated during construction should be made every six months. Do not dump near water sources or in surrounding areas. When the construction is finished, the bordering land should be restored to its previous state.

Within six months, the Central Forest Department’s Regional Office should receive a report on the execution of these regulations.
Details of how the stipulated terms and conditions were implemented should be posted on the APTDC website. They should be sent to the Central Forest Department and the Pollution Control Board on a regular basis. Permanent work camps, machinery, and construction equipment, among other things, should not be permitted in the CRZ region.

The project involves the construction of seven blocks totaling 9.88 acres, which will be known as Vijayanagara, Kalinga, Chola, Pallava, Gajapati, Vengi, and Eastern Ganga. As part of this tourism project, resorts will be erected on a total of 19,968 square metres. The goal is to finish it by 2022 for a total cost of Rs 240 crore. The site preparation cost Rs 92 crore for road construction and Rs 148 crore for building construction.