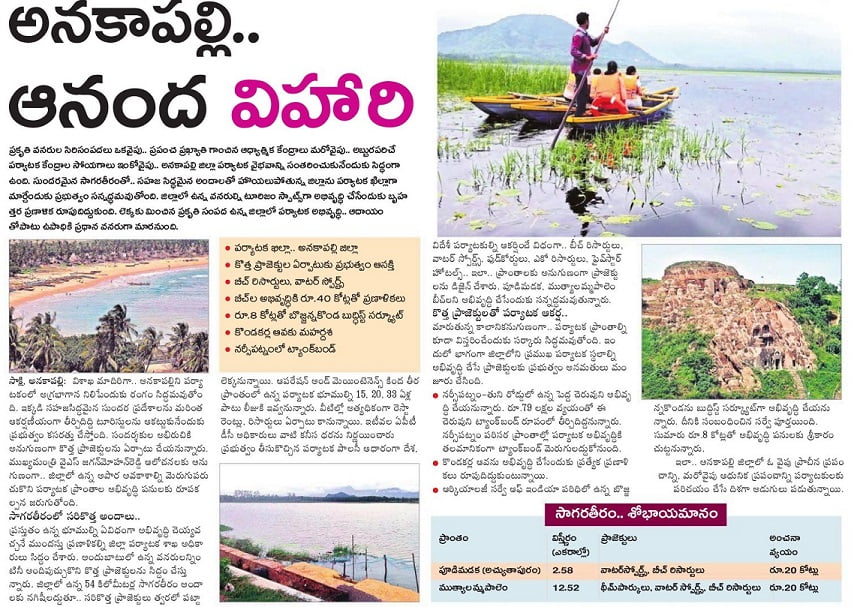 Like Visakha, the government is preparing to keep Anakapalle at the top of the tourism list. The government is attempting to make the area’s natural beauty more appealing to visitors. New initiatives will be created to cater to the preferences of the tourists. The development of tourist regions is being revamped to enhance the vast prospects present in the district, according to Chief Minister YS Jagan Mohan Reddy’s thoughts.

Officials from the District Tourism Department have drawn up preliminary ideas for developing the existing site. New projects will be established by taking in consideration all available resources.

The district’s 54-kilometre-long beach has been carved for its beauty. The latest projects will be on track soon. Tourist areas along the shore that are now being operated and maintained will be leased for 15,20,33 years. Restaurants and resorts will be built in the majority of these areas. APT DC officials recently determined their minimum price based on the government’s tourism programme, which aims to attract both local and international travellers. Design projects according to locations, such as beach resorts, water sports, food courts, eco resorts, and five-star hotels.The beaches of Pudimadaka and Muthyalammapalem are being developed.

On the Narsipatnam-Tuni road, a huge lake will be developed. The pond, which will be built in the shape of a tank bund, will cost Rs 79 lakh to build. The Tank Bund is expected to grow in importance as a tourism development hub in the Narsipatnam area. To develop the Kondakarla, special plans are being made.

The Archaeological Survey of India has decided to establish Bojjannakonda into a Buddhist place. The survey is now finished. The development works will cost around Rs 8 crore.

For tourists, the Anakapalli district features an old world on one side and a modern world on the other.The first steps toward introduction are being taken. accordance with Chief Minister YS Jagan Mohan Reddy’s roadmap to offer entertainment and health to the people of Visakhapatnam.