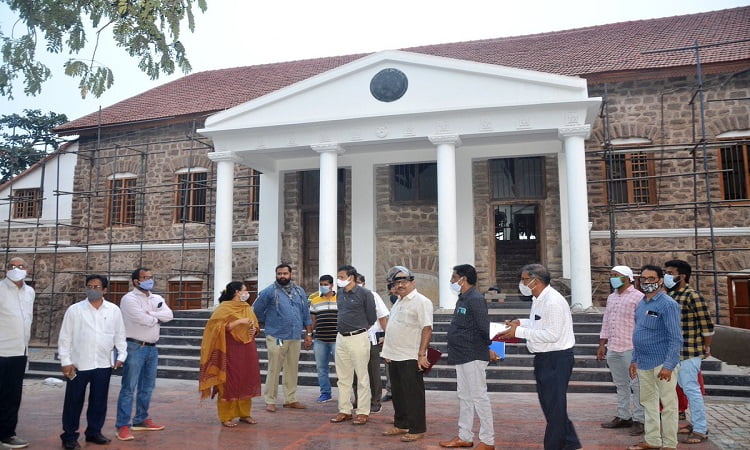 If the State government accepts the proposal submitted by the Greater Visakhapatnam Municipal Corporation (GVMC), two heritage buildings in the city would be utilised as training centres for senior government executives and officers recruited by the Andhra Pradesh Public Service Commission.

The Town Hall and the Old Municipal Corporation, which are opposite to each other in the city’s Old Town region, have been designated as the edifices.

Both buildings are historically significant and have recently been renovated and restored to their former glory by the GVMC.

The GVMC has committed around Rs15 crore in the project, which was carried out by Savani Heritage Conservation Private Limited.

The objective was to use the same materials that were used to build the gothic-styled stone edifices to restore them to their original shape.

“We want to use them for officer training now that they’ve been restored and rebuilt.” GVMC Commissioner G. Lakshmisha stated, “We are in talks with the AP Human Resource Development Institute (APHRDI) to use it as a retreat spot for the training session.”

“If the buildings are left vacant, they may deteriorate again, and if we open them up for private use, they will not be the same,” he said. “However, if they are used in a controlled manner and under our supervision, they will remain in good shape.”

“It’s a positive step,” Edward Paul, a preservationist and historian in Visakhapatnam, said, “and we’re optimistic that the structures will be preserved if they are used for this purpose.” The National Academy of Audit & Accounts Service has refurbished the 200-year-old Yarrows building in Shimla into a residential complex for teaching IA&AS officers.”

The Town Hall’s foundation stone was placed on April 3, 1901, and it was opened on March 8, 1904, by R.H. Campbell, the District Collector of Vizagapatam.

This is a famous building, not only for its stone-walled Gothic structure, but also for the illustrious performances of M.S. Subbulakshmi and Dwaram Venkataswamy Naidu, as well as lectures by C. Rajagopalachari, Sarvepalli Radhakrishnan, C.V. Raman, and Rabindranath Tagore, according to Mr. Paul.

This municipal structure, formerly known as the Municipal Council Building, was built in 1931.

The Visakhapatnam Municipality is one of the oldest, having been established in 1858. According to Jaishri Hatangadi, a heritage enthusiast, the town’s expansion necessitated the construction of a new building, which is how this edifice came to be.

She claims that this is the first Municipal Office building built during British control.