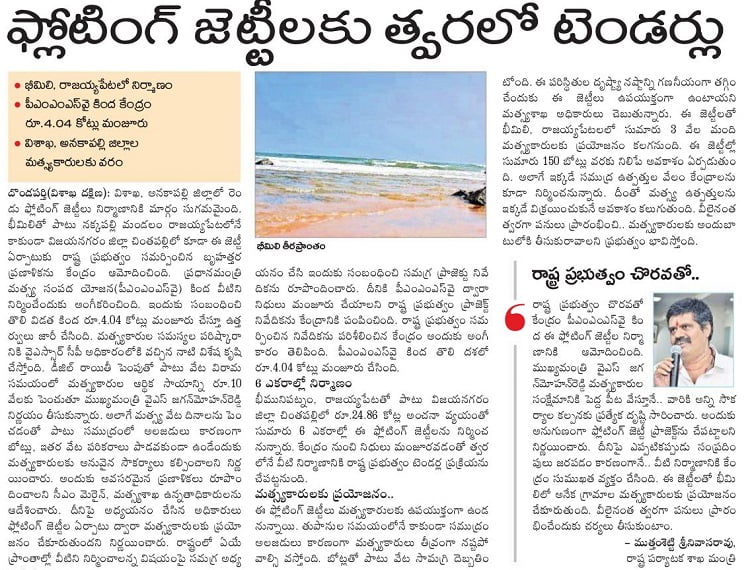 The construction of two flying jetty at Vizag and Anakapalli is easing the way. The plan to construct a jetty in Bheemili, along with Rajayyapeta in Nakkapalli mandal and Chinthapalli in Vizianagaram district, has been approved by the centre.The centre approved this under the Pradhan Mantri Matsya Sampada Yojana scheme.In this regard, the centre has ordered the release of Rs 4.04 crores as a first instalment.

In the survey, the officials came to the conclusion that the construction of a jetty would assist the fisherman, and they also presented a proposal for where the jetty should be built in the state. The state administration has submitted a report to the central government regarding the funding to be allocated for the jetty’s construction. The central government has decided to pay the first instalment of Rs 4.04 crores under the PMMSY scheme.

The jetties would be built on around 6 acres of land in the Bheemunipatnam, Rajayyapeta, and Vizianagaram districts at a total cost of Rs 24.86 crores. The state government is ready to accept tenders for the construction of a jetty now that the central government has agreed to provide the funds.

The development of the jetty would benefit approximately three thousand fishermen. The jetty can accommodate up to 150 boats. There will also be auction houses built there, where sea items can be auctioned directly. The state government has decided to build these jetties as quickly as possible and make them available to fisherman.