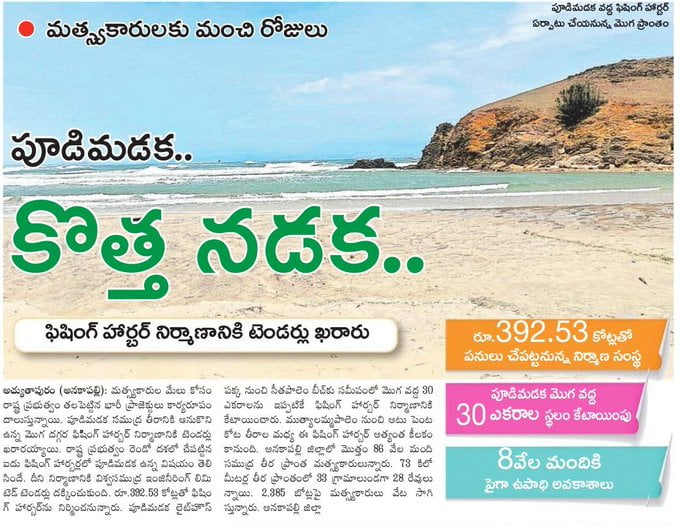 The state government is implementing massive projects for the benefit of fishermen. Tenders for the construction of a fishing harbour near Moga, which buys an elephant off the coast of Pudimadaka, have been finalised. Pudimadaka is one of the five fishing harbours being built by the state government in the second phase, according to reports. The construction contract was awarded to Vishwa Samudra Engineering Limited.

The fishing harbour will cost Rs 392.53 crore to construct. Thirty acres of land near the Pudimadaka lighthouse in Moga has been set aside for the construction of a fishing harbor.Between Muthialammapalem and Pentakota beaches, this fishing harbour will be the most important. There are 86,000 coastal fishermen in the Anakapalli district. In a 73-kilometre stretch of coastline, there are 28 ports and 33 communities.

Fishermen are going fishing on 2,385 boats. Over 70 different fish species can be found in the Anakapalli district. The tuna is shipped to Visakhapatnam before being shipped to Japan. The construction of the fishing harbour at Pudimadaka will employ 8,000 people directly and indirectly.The Pudimadaka Fishing Harbor allows coastal fishermen from Muthala Mmapalem, Tantadi, Pudimadaka, Bangara Mmapalem, and Pentakota to sell their catch directly. Mechanized vessels, like the barges that have been utilised up to now, can be retained in the harbour.

The construction of cold storage for fish stocks, boat repair professionals, and operational failures of export and import traders will further strengthen the area financially. The day is approaching when a long-cherished dream will be realised.