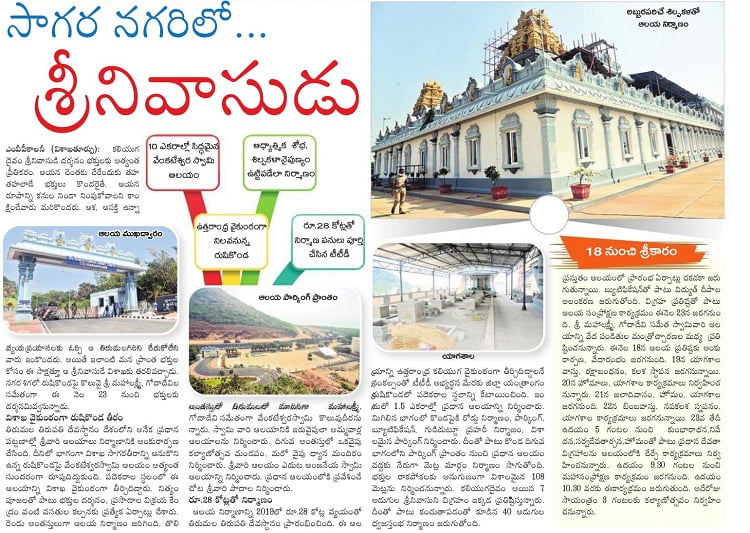 From now on, the most well-known Venkateswara swamy will reside in Visakhapatnam. A lovely temple awaits visitors on one of Rushikonda’s hills. On the hill in front of the Rushikonda beach, TTD officials constructed the TTD temple.

The temple was built in almost eleven acres. In between the highway of Visakha and Bheemili beach, the temple’s ghat road was built at Rushikonda. The ghat road was constructed beautifully with the greenery on both sides of the road. The arch at the entrance of the hill welcomes the visitors as a special attraction. The lord Venkateswara Thirunamam was built on the left side of the temple which is supposed to be a special attraction of the temple. The special sculptures designed by Tirumala Tirupathi sculpists are ready for the visitors.

The temple construction has started in the year of 2019 with a budget of Rs 28 crores. The state government has sanctioned 10 acres of land in the hill of Rushikinda to make the temple as South Andhra’s Kaliyug Vaikuntam as per the request from TTD.

A seven feet Venkateswara Swamy idol to be placed in the temple. Along with this a bronze covered dwajasthambam of 40 feet construction is being done. The rooms for darshan, prasadam outlet, marriages, poojas and kitchen facilities are constructed. The temple was built as a two storey building. Similar to Tirumala Tirupathi temple, at one floor, the idol of Venkateswara along with Mahalakshmi Godadevi is to be placed.The two sides of the swamy temple,goddess temple are constructed. In the other floor,Kalyanotsavam mandap and dhyana mandir were constructed. Anjaneya temple also constructed in front of the lord Venkateswara temple. Srivari feet has been placed at the entrance of the temple. 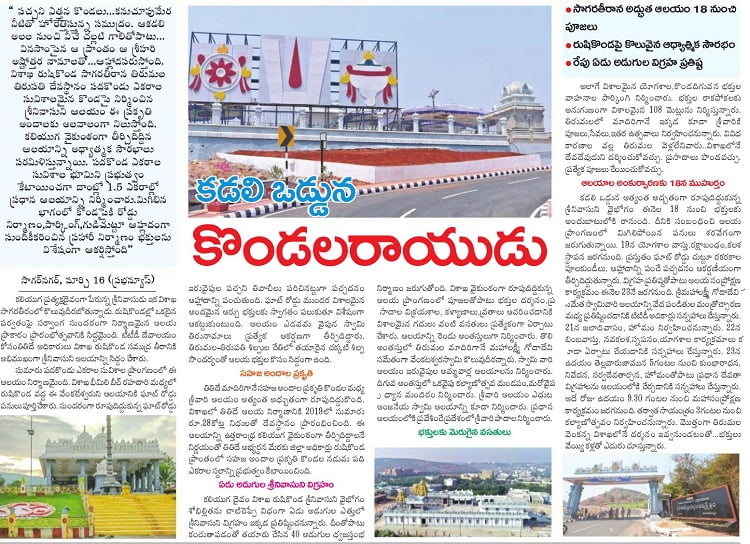 Spacious yoga place and parking place at the down hill was built. A 108 steps stairway is under construction. At the temple in Vizag, poojas, sevas and other utsavs are to be performed the same as in Tirumala. Special poojas,prasadam are performed same as in Tirupathi.

From March 18th, the Venkateswara swamy at the seashore is made available for darshan to the devotees. the remaining works in the premises of the temple are being done faster. On 19th, vastu of yogasala, rakshabandam and kalasa sthapana to be done. The two sides of ghat road is being beautified by placing flower pots and greenery.On 23rd of this month the idol placement and alaya samprokshanam to be done. On 21st, jaladivasam and homam to be done. On 22nd, officials are planning to do bimbi vastu, navakalsa and yagasala programs. On 23rd, from 05:30 Am kumbaradhana, nivedana, sarva devatharchana, homam and placing of main idols in the temple are going to take place. From 3 PM on the same day,kalyanotsavam to be held.