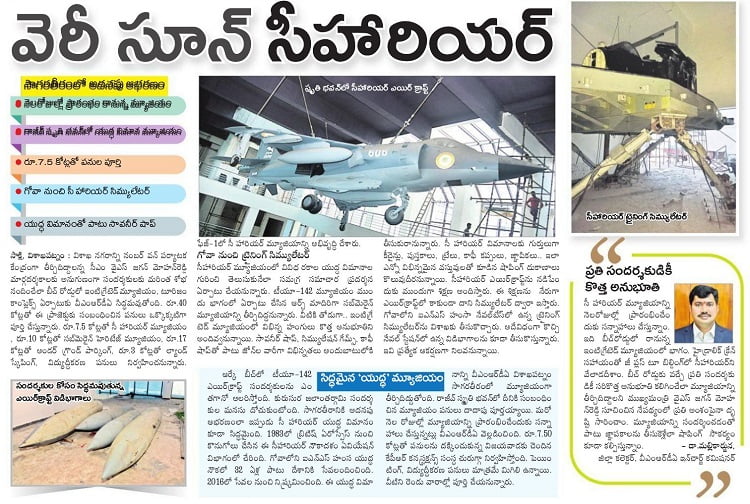 VMRDA is planning to build an integrated museum and tourism complex on Beach Road to further thrill visitors, following CM YS Jagan Mohan Reddy’s directive to make Visakhapatnam the number one tourist destination.At a cost of Rs 40 crore, the project is being finished one by one. The Sea Harrier Museum will cost Rs 7.5 crore, the Submarine Heritage Museum will cost Rs 10 crore, underground parking will cost Rs 17 crore, and landscaping and electrification would cost Rs 3 crore.

The Sea Harrier Museum will have a comprehensive information exhibition regarding numerous types of aeroplanes. The arch in front of the TU-142 Museum inspired the design of the submarine museum.In addition to them, the Integrated Ted Museum’s various touches will provide you with a unique experience. Along with the coffee shop, a souvenir shop, simulation games, and zone-specific versions will be provided. Sea Harrier planes are known for their keychains, books, trays, coffee cups, and souvenirs, among other things.

Sea Harrier planes conduct pre-flight training. Instead of flying, direct this training through its simulator. Visakhapatnam received the training simulator from the ISS Hansa Naval Base in Goa. Spare parts are also being brought in from the Kochi Naval Station. These stick out as a unique feature.

At RK Beach, M Tagano entertains visitors with a TU-142 ‘U’ aircraft. The visiting caste is enthralled with the Kurusura submarine. The Sea Harrier fighter is presently being prepared as an extra beach decoration. The Seahair Navy was purchased from British Aerospace in 1983 and joined the Aviation Division.On the INS Swan warship in Goa, she served the country for 32 years. In 2016, services were discontinued. This warplane is being developed as a museum on the Visakhapatnam seashore by the VMRDA.

The Rajiv Smriti Bhavan’s museum is nearly finished. Sanna Hall is slated to open in another month, according to VMR DA. KCR Constructions, based in Vijayawada, won the project for Rs 7.50 crore and is actively managing it. Painting and electrical work are the only remaining tasks. In two weeks, these will be finished.

The Sea Harrier Museum will open in less than a month. It will be a part of the Integrated Museum on Beach Road, which will open in the near future. The seahorse was hung in the G Plus Two building with the use of a hydraulic crane.Chief Minister YS Jagan Mohan Reddy has proposed that the museum be created to give every visitor to Beach Road a completely different experience. In addition to museum visits, we offer a store where you can purchase items. – VMRDA Commissioner in Charge, Dr. Mallikarjuna, District Collector