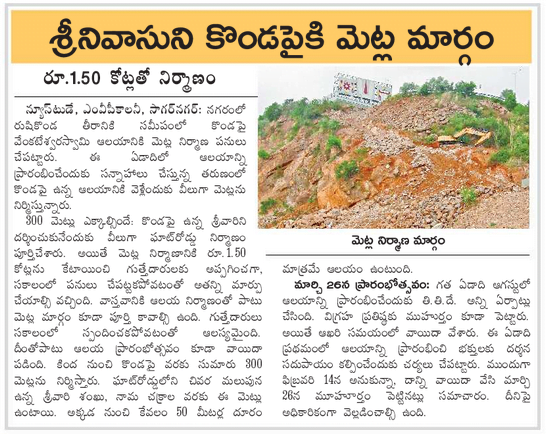 A stairway is being built at the Venkateswaraswamy Temple in Rushikonda, Vizag. Officials want to open the temple this year, so in this regard they’re building a stairwell to get there.

To get to the idol at the top of the hill, a ghat road was constructed. Guthedharu has been given Rs 1.50 crores to build the stairs. Officials have replaced him as the project’s contractor since he did not complete the work on schedule.In fact,along with the construction of the temple the stairway is also to be built.The job has been delayed due to a miscommunication from Guthedharu. In addition, the temple’s opening has been postponed. To get to the temple from the bottom of the hill, around 300 steps must be built. The temple is only 50 metres away from the stairway.

TTD had agreed to open the temple last year, and they had also set a date for the idol’s inauguration. However, it was eventually cancelled owing to a variety of factors. After that, they intended to open the temple in the beginning of this year and set February 14 as the date. It has been cancelled as well. Finally, on March 26th,2022, officials are planning to open the temple. An official statement on the topic has yet to be issued.