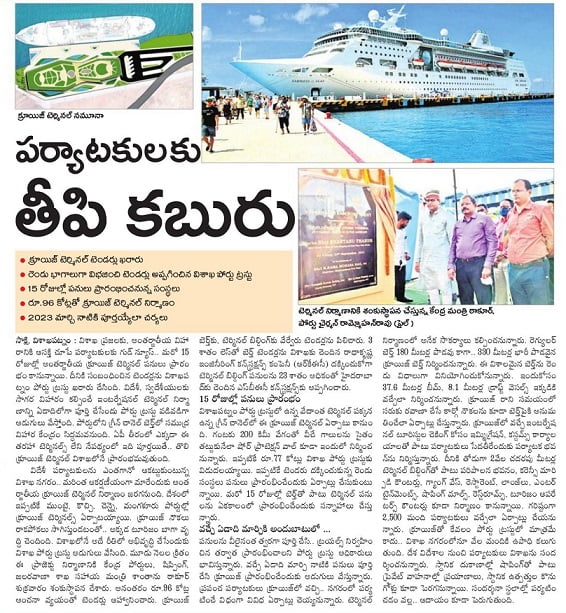 The Visakhapatnam Port Trust has finalized project tenders, and construction of the much-anticipated cruise terminal will begin within a week (VPT).

The cruise berth was given to Vizag-based Radhakrishna Engineering and Construction Company, while the terminal building was awarded to Hyderabad-based SEBC Constructions.

The successful bidders have already received work orders. Work on the cruise terminal project will begin within two weeks of the clearance of technical studies.

The cruise berth will be 180 metres long and will have two mooring dolphins on each side. It can handle Panamax vessels with a gross tonnage of 50,000-1,000,000 GRT, as well as ships with a length of 300 metres, a beam of 37.6 metres, and a draught of 8.1 metres. According to him, the cruise terminal with new infrastructure will be ready by February of next year.

The VPT Chairman stated that the passenger terminal building will have a total built-up area of 3,530 square metres.

Vizag is getting ready to go on domestic and international cruises.

On November 16, 2018, the VPT approved in-principle clearance for the ’77 crore cruise terminal project.

During the detailed design stage, IIT Madras, the project consultants, raised the berth estimate to ‘64.24 crores, which included coast protection work. The cost of the terminal building has been reduced to Rs 31.81 crore. On May 7, 2021, the VPT accepted the project’s increased cost of Rs 96.05 crore.

The project was proposed to be started with 50% funding from the Ministry of Tourism’s Assistance to Central Agencies for Tourism Infrastructure Development programme. On July 26, 2021, the Navy approved the project. On October 26, 2021, the State Environment Impact Assessment Authority approved the CRZ.

The new terminal would greatly facilitate both domestic and international cruise travel from Vizag. According to the VPT Chairman, it would also provide a large number of jobs for local citizens.