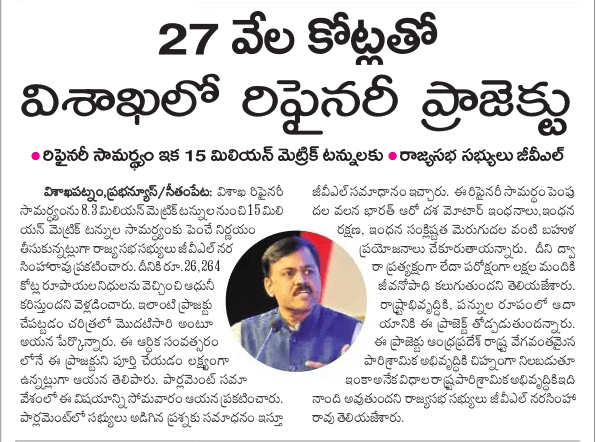 The Visakha Refinery would expand by Rs 26,264 crore

The Visakha Refinery of HPCL will be modernised and expanded at a cost of Rs 26,264 crore.

In a statement issued here on Monday, BJP MP G V L Narasimha Rao stated, “This is by far the most extensive industrial undertaking ever in Andhra Pradesh.”

The capacity of the refinery would be increased from 8.3 to 15 million metric tonnes per annum under the Visakha Refinery Modernisation Project (VRMP).

The project’s benefits and impacts are predicted to be numerous, including the provision of Bharat Stage-VI-compliant motor fuels.

According to a Rajya Sabha member from the BJP, the project will create a large number of direct and indirect jobs during the construction and post-construction stages, benefiting Indian industry in general and Andhra Pradesh in particular.

“The project cost will have a strong local component since it will create and aid local businesses during the building and post-construction stages,” Narasimha Rao explained.

MASSIVE 27,000 CRORE REFINERY PROJECT IN VISAKHAPATNAM – Reply by Petroleum Ministry to my question in Parliament.