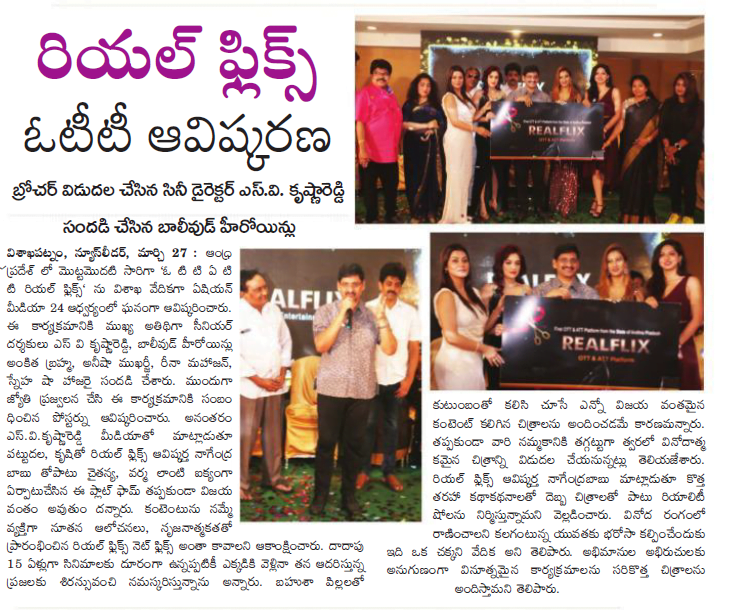 Many people turned to OTT (over-the-top) platforms for entertainment during the corona outbreak, according to R Nagendra Babu, the head of the newly launched OTT platform.

On Sunday, he revealed the logo for the Andhra Pradesh-based OTT portal ‘Realflix,’ saying, “Even as theatres began to reopen once the lockdown was lifted, OTT platforms are here to stay. The goal of the project is to give high-quality content to Telugu viewers all over the world.” Filmmaker SV Krishna Reddy unveiled the OTT and ATT (Any Time Theatre) platforms’ logos in the presence of performers Ankita Brahma, Sneha Shaw, and Reena Mahajan, among others.

Director Krishna Reddy, speaking at the event, stated that great programming is well-received by the masses all over the world. President of the Film and Television Promotion Council of Andhra Pradesh Chaitanya Janga and vice president of the Andhra Pradesh Film Chamber of Commerce VS Varma Pakalapati expressed confidence that the OTT platform will give the rest a tough time with its diverse content, saying it is the state’s first OTT platform and live streaming will begin in May.

The new OTT platform aims to bring a wide range of entertainment programmes to the forefront, including web series, reality shows, premier films, cooking shows, yoga, and spiritual material. Concerning the additional perks, Nagendra Babu, the CEO of the OTT platform, stated that the goal is to employ adolescents in the 24 cinematic trades.