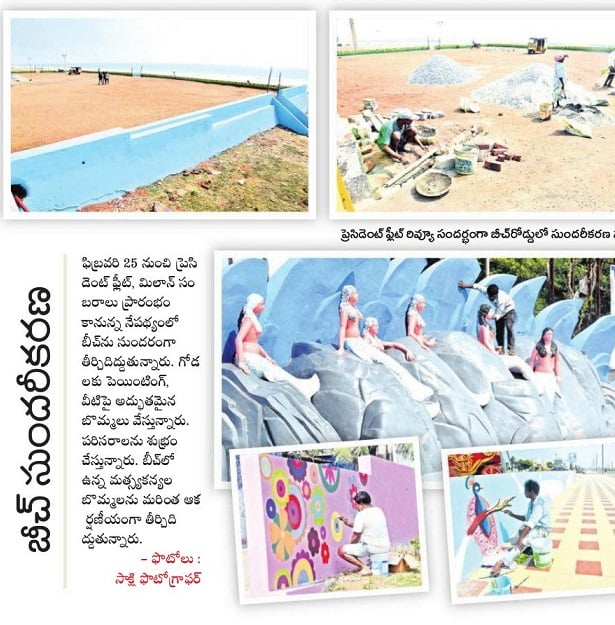 This is when the Hon’ble President of India, together with other senior government and defence leaders, visit the Eastern Naval Command in Visakhapatnam to demonstrate the power of the Indian Navy. MILAN 2022 is the next event, which will take place from February 22 to March 4, 2022.

This is an international event that will feature naval forces and personnel from 45 countries. On February 26th, 2022, India’s President, Ram Nath Kovind, and Prime Minister, Narendra Modi, are anticipated to visit MILAN 2022.

Both events will take place on the RK Beach Road, which runs from the Naval Coastal Battery (NCB) to The Park Hotel Junction. Colors are being applied to the statues and antiques on this path. This road will be resurfaced with a new asphalt layer. The walls along RK Beach Road will be adorned with beautiful paintings. Also being painted are the dividers. The Telugu Talli Flyover divider will be covered with plant pots. Large crowds are expected to congregate to view the Navy displays during MILAN 2022, therefore temporary barricades will be placed on both sides of the RK Beach Road to keep the masses under control.

The President’s Fleet Review 2022 is an assembly of ships from the Indian Navy, Coast Guard, and commerce ships. A fly-past for the President would also be performed by 50 naval aircraft. The fleet is reviewed by the Hon’ble President of India, who serves as the Supreme Commander of the Armed Forces, according to the Indian Constitution. Until now, India has had eleven fleet reviews, the most recent of which took place in Visakhapatnam on February 6, 2016. Prior to boarding the Presidential Yacht, the Hon’ble President of India is greeted by a Guard of Honour.