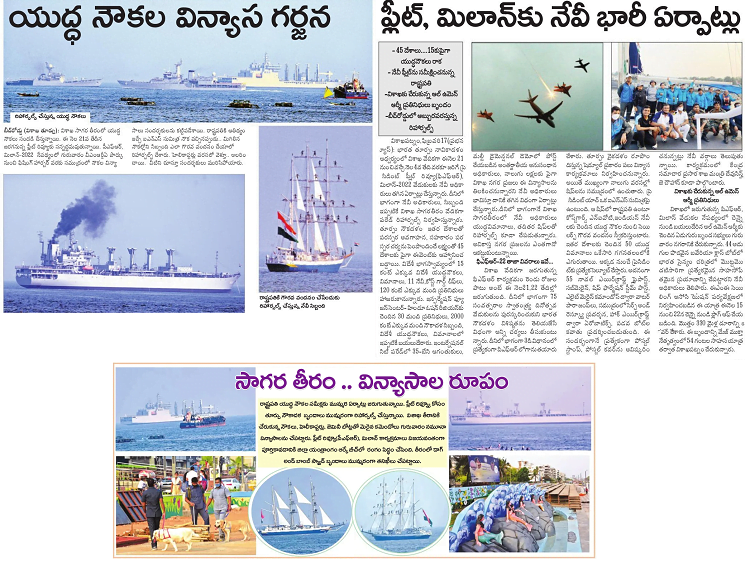 The first fleet sample show review of warships was held on the seashore at Vizag on Thursday. The show began at 3:30 p.m. and concluded at 5:00 p.m. The warships were organised in an order from RK Beach to Tenneti Park beach by anchoring them. The warship on which the President travels, as well as two warships behind it, have been examined. Many sailing boats have sailed between the warships. Sailing vessels that are approxiamately 50 feet tall with sailors that had climbed four flights of stairs sailing on it.

The show featured Navy-owned Sail Training Ships as an unique attraction. Tarangani and Sudarshini are their names. Ships from the Navy, the Coastal Guard, the National Institute of Ocean Technology, and the Shipping Corporation of India also took part. Some officials have boarded the ships and observed how they are anchored.

On Thursday morning, a sample fleet review was held. It will be tough for domestic flights if it is held in the evening. As a result, the sample review has been scheduled for the morning.

The citizens are interested in the fleet review and are flocking to the beach to see the warships that have been assembled for the fleet review. The ships that will take part in the Presidential Fleet Review have arrived at Vizag’s seashore. Those ships are anchored near the beach road in the sea. Due to the increased number of visitors to the ships, Beach Road has become busy.

The famous sailing ship Madaey is to participate in the Presidential Fleet Review.