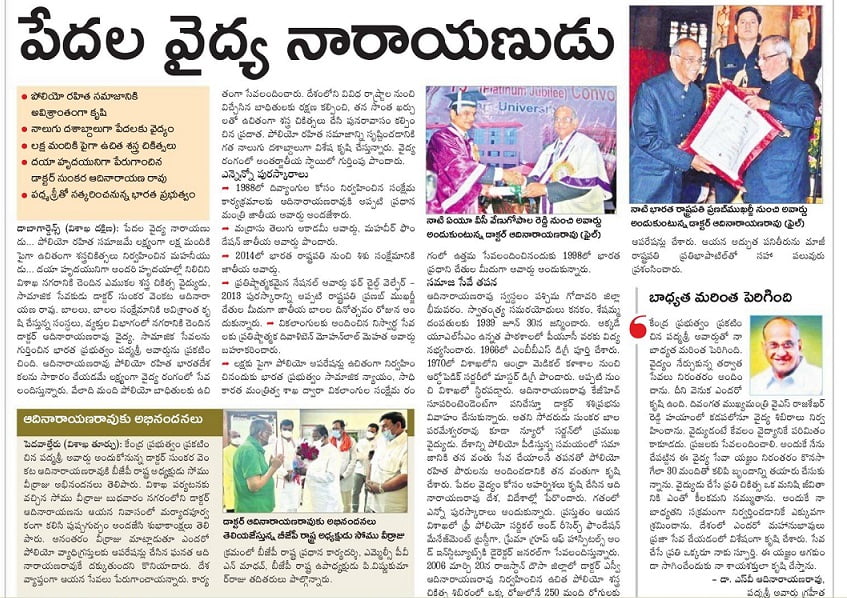 Sunkara Venkata Adinarayana Rao, a doctor from Vizag, has awarded the Padma Shri

For his contributions to thousands of polio sufferers, Sunkara Venkata Adinarayana Rao, a well-known Visakhapatnam doctor, was awarded the Padma Shri Award.

Adinarayana Rao, an 82-year-old orthopaedic surgeon, is known for his work with the poor. During his six decades as a doctor, he received numerous distinctions.

On June 30, 1939, Adinarayana Rao was born in Bhimavaram, West Godavari district, to independence fighters Kanakam and Seshamma. He graduated from Andhra Medical College with a bachelor’s degree in medicine in 1966 and a master’s degree in orthopaedic surgery in 1970.

Adinarayana Rao was born in Vizag and married to R Sasiprabha, the former superintendent of King George Hospital. For his outstanding contributions, he received numerous national and international awards.

He is the managing trustee of the Free Polio Surgical and Research Foundation at the present. He is well-known throughout India, particularly in North India, for his treatment of polio patients. To date, he has conducted over one lakh procedures.

In 1988, Adinarayana Rao received a national award from India’s Prime Minister for his work with disabled people. He was also awarded the Madras Telugu Academy Award. The Mahaveer Foundation has given out a national award. In 2014, the President of India presented him with the National Award for Child Welfare. He oversees the Prema Group of hospitals and institutes as Director-General.