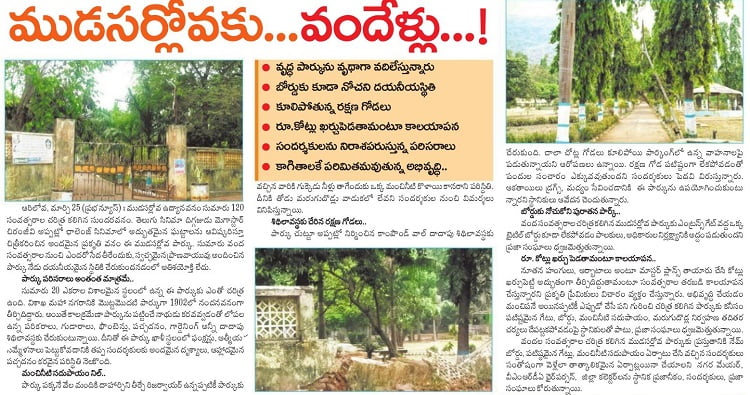 Mudasarlova Park, located in Visakhapatnam, has a 120-year history. This park was used to film many sequences from the movie Challenge, which starred the iconic Megastar Chiranjeevi. The park, which has provided pure oxygen and a resting place for many visitors for over a century, is currently in a miserable state.

The park, which is about 20 acres in size and was built in 1902 in Visakhapatnam, has a rich history. Because no one is there to look after the park, the greenery, fountains, gardening, tents, and other equipment have deteriorated. As a result, the park is only used for functions and get-togethers.

Aside from the reservoir at its side, the park does not even have a water tap for drinking water. The park’s washrooms are also not being used, according to visitors.

The park’s compound wall is in bad shape as well. Many of the park’s walls are collapsing on visitors’ vehicles. Pigs are freely roaming the park because the compound wall is in poor condition. Residents complain that the park has turned into a hangout for drug addicts and drunken people.

Nature lovers are outraged because the government is making statements about developing the park with several plans, yet the park has yet to be developed. People activists and nature lovers are furious with the management for failing to provide even basic amenities such as drinking water, restrooms, and the restoration of the fountain, as well as a strong gate and board at the park’s entrance.

Tourists to the park, neighbours around the park, and volunteer organisations are urging that the city mayor, VMRDA chairperson, and district collector at the very least install a name board, strong gates, and a drinking water facility in the park to attract visitors and restore the century old park’s fame.