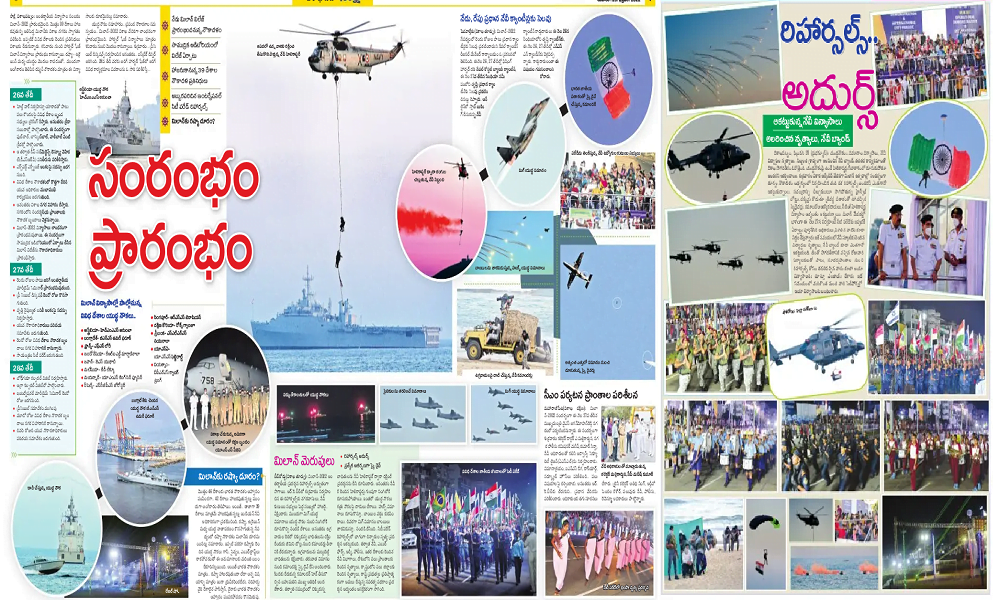 On Sunday, Chief Minister YS Jagan Mohan Reddy will be a chief guest during the Milan-2022 International City Parade in Vizag. Jagan is scheduled to arrive in Vizag around 2.50 p.m.

He’ll then go to the Naval Dockyard to see the INS Vela submarine. Later that evening, he would see an operation demonstration at Beach Road’s City Parade. He will also speak to the public.

The City of Destiny is ready for Milan, which will be launched at Samudrika Navy Auditorium by Union Minister of State for Defence Ajay Bhatt. He will then open the Milan village, which would feature Indian culture. Around 40 handcraft stalls from throughout the country, tourism stands showcasing tourist destinations, and food stalls serving international and Indian cuisine will be present. Some foreign navies have opened up stall in the village as well.

On Sunday and Monday, an international marine seminar will be held. Milan-2022 will be the largest naval exercise ever, with 40 countries participating. The Indian Navy hosts the biennial Milan to bring together friendly navies for professional engagement and mutual understanding.

Meanwhile, ten foreign ships have arrived in Milan to take part in the event. On Friday, five ships arrived, while five others had previously landed in Vizag on Thursday. The crew of the P-8A US Navy multi-mission maritime patrol and reconnaissance aircraft, which arrived at INS Dega, was greeted warmly by the Indian Navy.

The City Parade, a multifaceted Operation and Demonstration, and Flypast will feature around 2,000 naval personnel aboard foreign warships and aircraft, as well as 35-odd contingents.

On Sunday, a massive crowd is scheduled to throng the RK Beach Road to see the City Parade and Operation and Demonstration. Meanwhile, in preparation for the Chief Minister’s participation in the City Parade, District Collector A Mallikharjun, along with Commissioner of Police Manish Kumar Sinha and Navy officials, conducted an advance security liaison.