Mapping in 3 Divisions over 54,500 Jobs in Railway Zone Visakhapatnam 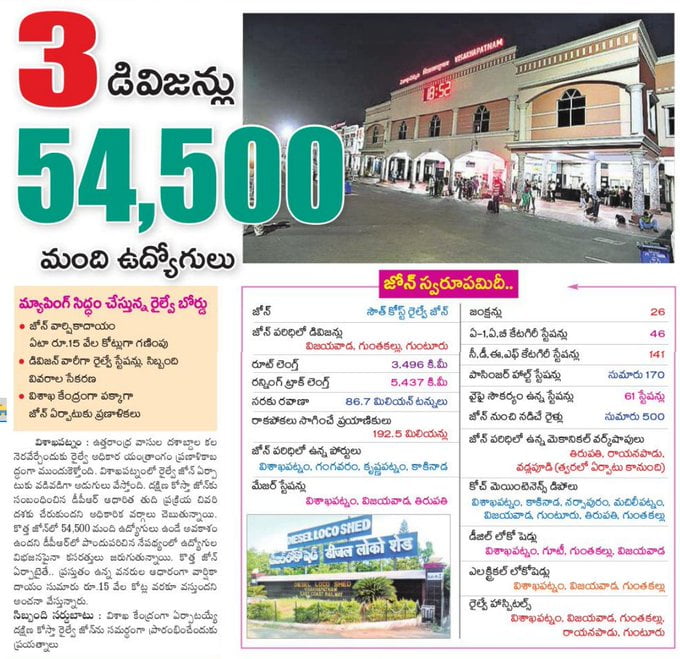 The railway authorities are moving ahead with a plan to fulfil the decades-long dream of the people of North Andhra. In Visakhapatnam, the railway zone is in full effect. Official sources say the DPR-based finalisation process for the South Coast Zone has reached its final stage. Work on the division of labour is also proceeding, after the inclusion in the DPR of the possibility of 54,500 employees in the new zone. Based on available resources, the yearly revenue from the new zone is anticipated to be over Rs 15,000 crore.

Efforts are being made to successfully launch the South Coast Railway Zone, which would serve as Visakhapatnam’s hub. Usually when the zone is established the duties start with 30 to 40 thousand employees. Gradually increase that number. However, in the South Zone, 65,800 have saved in DPR, which is needed. At the commencement of operations, however, it was predicted that 54,500 employees would be required. There are 17,985 people in the Waltair Division Office and 930 in the Waltair DRM Office. The process of adjusting them to the two divisions is currently underway. The South Coast Zone also includes the divisions of Vijayawada, Guntakallu, and Guntur. In total, authorities plan to hire 50,000 people throughout the three divisions.

Officials from the Railway Board are evaluating the detailed project report (DPR) for the new zone’s establishment. The zone will include Andhra Pradesh, Telangana, and parts of Karnataka and Tamil Nadu.

When do zone activities begin?

What’s the first step? How should employees be retrained? How do you work with divisions to coordinate? Falling within the zone Exercises are underway on issues such as railway stations. Similarly, railway officials claim that Crody is researching several types of railway stations, as well as the resources available to create them in the new zone, as well as the new trains that will serve as the zone centre.

Taking into account the sources of revenue from the three divisions, this zone Annual revenue figures for 2018-19 are Rs 12,200 crore (revenue is likely to increase when the DPR is prepared, as calculated in d). Officials argue that in the current environment, the possibilities of raising Rs 15,000 crore are slim.