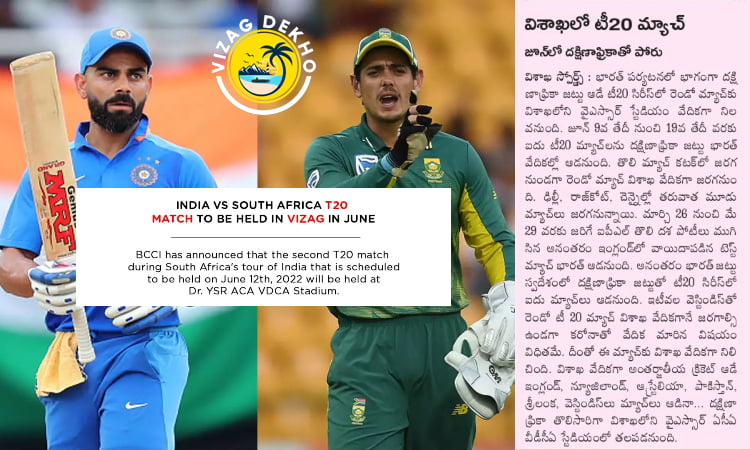 India is preparing to host the South African side for a five-match T20 series in June, following the completion of the IPL 2022.

The BCCI has already confirmed that the IPL will be staged in Mumbai and Pune from March 26 to May 29, with the T20 series against the Proteas starting just 10 days later.

The BCCI’s Apex Council decided on the schedule for the South Africa series on Wednesday, and matches are expected to take place from June 9 to 19. According to a Cricbuzz report, the locations were also finalised during the conference, and the matches will be held in Cuttack, Vizag, Delhi, Rajkot, and Chennai.

According to the source, Bengaluru and Nagpur were supposed to get the games in the series, but Cuttack and Vizag were instead given them, probably because the two centres missed out on the T20 matches during the previous West Indies series.

The BCCI scheduled the six matches against the West Indies in only two cities: Ahmedabad and Kolkata, in order to reduce travel and the threat of the Covid-19.

The Apex Council has also considered the country’s weather conditions in June, and information received by the board managers (presented at the meeting) suggests that the first game in Cuttack may experience some light rain (as is the seasonal norm in that part of the world at that time of the year).

The second game in Vizag has a reduced chance of rain, but beautiful weather is expected in the other three locations – Delhi, Rajkot, and Chennai – during those games.

Team India will come to England after the South Africa series to play an unfinished Test and six white-ball matches.