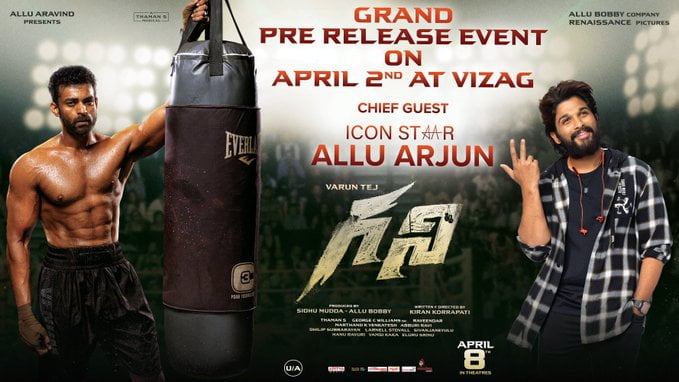 Varun Tej’s new film leaves no stone untouched in its attempt to amuse fans. With the actor’s new bold and fit look, the trailer, which was unveiled in March, created a big sensation. Fans were enthralled by the teaser and greeted Tamanna’s song Kodthe with open arms, as it quickly surpassed a million views. In Visakhapatnam, the makers are planning a pre-release event for the mega-film Ghani.

The company has roped in Stylish Star Allu Arjun as the Chief Guest for the major pre-release event of Ghani in Visakhapatnam, which is set to take place on 2 April 2022 at the City of Destiny. The movie, which was scheduled to release on February 25, 2022, has been delayed. On April 8, 2022, the film will be released in theatres. The film is directed by Kiran Korrapati which focuses on boxing. Special performances and surprises are claimed to be planned for the Pushpa star by the film unit. The Chief Guest was mentioned in a tweet by the makers of the film Ghani.

Saiee Manjrekar plays the female lead in the romantic sports drama, which also features Jagapati Babu, Upendra, Suniel Shetty, Naveen Chandra, and Nadia. SS Thaman scored the film score and audio, which was produced by Renaissance Pictures and Allu Bobby Company. For his boxer looks in the sports drama, the actor was coached by Tony Jeffries, a former England boxer who earned a bronze medal at the 2008 Summer Olympics.