GVMC is planning to convert Dumping Yard into Large Park 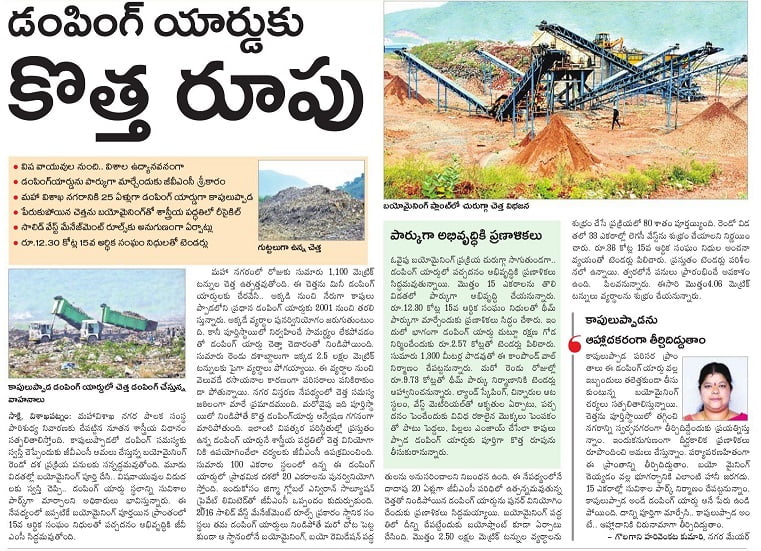 The Greater Visakhapatnam Municipal Corporation’s new scientific approach to sanitation is showing signs of success. Preparations are underway for the second phase of biomining process implemented by GVMC to put an end to the dumping problem in Kapuluppada.The officials plan to finish the biomining in three stages, halt the emission of poisonous gases, and transform the dumping yard into a large park. In this context, GVMC is planning for greenery growth in a region where biomining has already been accomplished with funds from the 15th Economic Community.

The city produces over 1,100 metric tonnes of waste per day. Since 2001, the rubbish has been transported to the mini dumping yards, where it is then transported directly to the main dumping yard at Kappulapadu by the farmers. This is where the garbage is recycled. The dumping yard, on the other hand, was cluttered with garbage and lacked the capacity to operate at full capacity. For nearly two decades, more than 2.5 lakh metric tonnes of rubbish had been deposited here.

This is where the garbage is recycled. The dumping yard, on the other hand, was cluttered with garbage and lacked the capacity to operate at full capacity. For nearly two decades, more than 2.5 lakh metric tonnes of rubbish had been deposited here.GVMC has taken preparations to utilise the existing dumping yard for scientific disposal in such a dire case. In the first phase, the dumping yard, which encompasses around 100 acres, is recycling 20 acres. For this Pvt. Ltd. GVMC, Jigma Global Environment Solution signed a contract.

The 2016 Solid Waste Management Rules stipulate that local companies must adopt biomining and bioremediation practices at their dumping yards rather than relocating them. It is against this backdrop that plans are afoot to reuse the garbage-filled dumping yard that has been generating within the GVMC for nearly 20 years. In the biomining process, a bioplant has also been set up to carry out this task. Waste treatment for a total of 2.50 lakh metric tonnes is 80 percent complete. It was chosen in the second instalment to clean up the legacy garbage on 38 acres.

Tenders were issued with a budget of Rs 36 crore from the 15th Finance Commission’s finances. Tenders are being considered right now. Things will very likely begin soon. Will be summoned. A total of 4.06 metric tonnes of garbage will be cleaned this time.

The city mayor, Golagani Hari Venkata Kumari stated that,’ To avoid any complications caused by the dumping yard near Kapuluppada, biomining procedures are being taken. We are attempting to eliminate all rubbish and make the city cleaner. As a result, we are developing and implementing long-term plans. We’ll make this location more environmentally friendly. Bio-mining has no negative impact on the environment. On a 15-acre plot of land, we plan to build a large park. Let’s make a comprehensive overhaul. Let’s make it a pleasure address.’