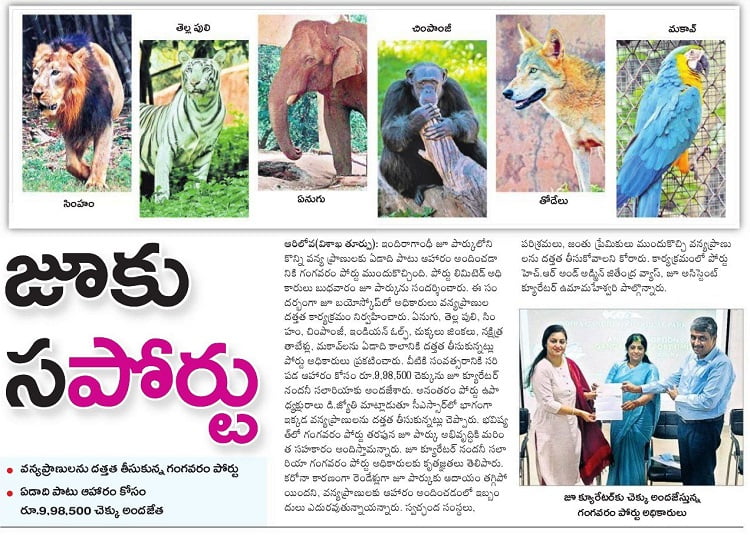 Gangavaram port has come forward to donate food to the animals in Indira Gandhi Zoo Park in Visakhapatnam. Officials of Port limited visited the zoo on Wednesday. On this occasion, the officials have conducted an adoption program through Zoo bioscope.

Port officials have stated that they have adopted Elephant,white tiger, lion, chimpanzee, Indian wolf, spotted deer, star tortoise and macau for one year. A cheque of Rs 9,98,500 is given to the Zoo curator Nandini Salaria in the regard of food for the adopted animals.

Later, port vice president D Jyothi while speaking stated that as a part of CSR they have adopted the animals. She also stated that they will support the zoo park in future also.

Zoo curator Nandini Salari thanked Gangavaram port officials. She also explained that due to covid pandemic, the income of the zoo has decreased and they faced difficulty feeding the animals in the zoo. She has appealed to the animal lovers, industries and NGOs to adopt the animals in the zoo. Port HR and admin Jithendra Vyas and Junior assistant curator Uma Maheswara Roa has participated in the event.

Gangavaram Port limited have adopted animals under it’s Corporate Social Responsibility (CSR) Programme for a period of one year.