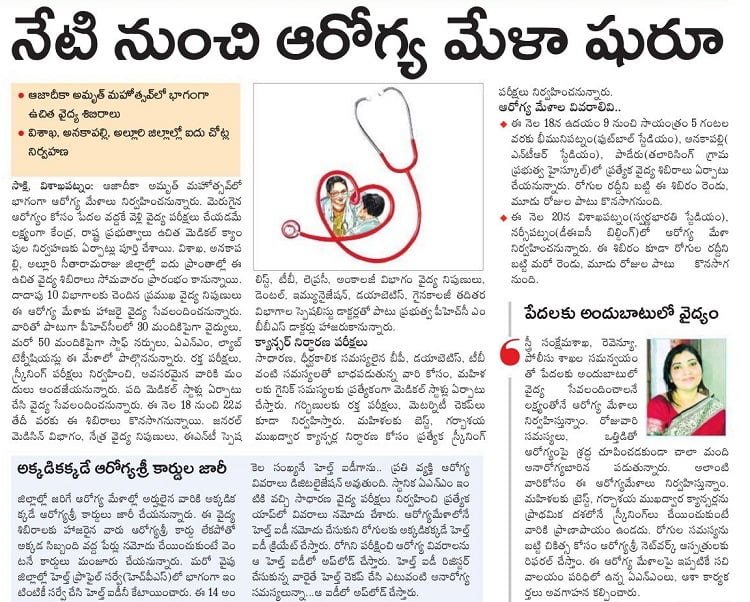 On the occasion of Azadi Ka Amrit Mahotsav, aarogya melas are to be organised. The state and central governments have completed the arrangements for a free health camp with the goal of directly reaching the underprivileged to improve their health. These health camps will begin on Monday in five places across the Visakha, Anakapalli, and Alluri Seetharama Raju districts. Leading medical professionals from ten departments are expected to attend the health camps and deliver services to the needy. In addition, 30 doctors, over 50 staff nurses, ANM, and lab technicians will attend these camps.

In the 10 medical stalls set up in the health camps, blood tests, screening tests, and required medicines will be given to the needy. The camps will take place from the 18th to the 22nd of this month. The camps will be attended by specialised doctors from general medical departments, ENT specialists, TB, Leprosy, Oncology, dental, immunisation, diabetes, gynaecology, and other departments, as well as government PHC MBBS doctors.

The organisers have set up special medical stalls for general and chronic diseases such as high blood pressure, diabetes, and tuberculosis, as well as gynae issues for women.For pregnant women,blood tests and maternity check up will be done.Special screening tests are to be conducted for ladies regarding breast and cervical cancer.

On the 18th, from 9 a.m. to 5 p.m., health camps will be held in Bheemunipatnam’s football stadium, Anakapalli’s NTR stadium, and Paderu’s Talarsingh government high school. These camps will be extended by two or three days depending on the number of people attending. On the 20th, these camps will be hosted in the swarna bharathi stadium in Visakhapatnam and the DEIC building in Narsipatnam.