ESI Hospital in Visakhapatnam has been approved by the central government with Rs.390 crore 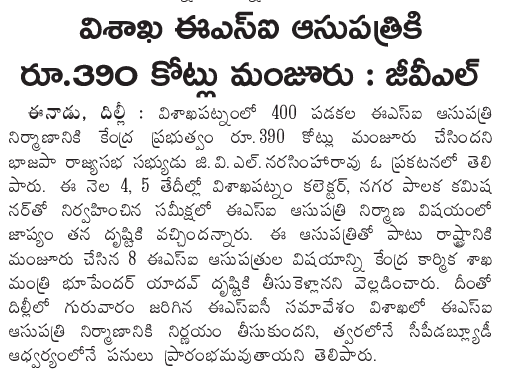 MP GVL Narasimha Rao said that he has been following up with the Ministry of Labour and Hon’ble Union Minister for Labour Shri Bhupender Yadav to have all eight ESI hospitals in Andhra Pradesh approved in the budget.

The Employee State Insurance Corporation (ESIC), Ministry of Labour, Government of India, has approved a budget of Rs.390 crores for the construction of a 400-bed ESI Hospital in Visakhapatnam, according to MP. The ESI Corporation’s Standing Committee is meeting to make a decision. The construction will be done by CPWD as soon as possible.

Apart from following up with the central government, he evaluated civic services that were outstanding during his meeting with the Municipal Commissioner and District Collector of Visakhapatnam on January 4 and 5. This delayed the construction of the 400-bed ESI Hospital in Visakhapatnam.

He would like to express his gratitude to Hon’ble Prime Minister Shri Narendra Modi Ji and Hon’ble Union Minister for Labour Shri Bhupender Yadav for yet another major project for Andhra Pradesh’s people.

He would continue to push for the completion of other ESI hospitals in Andhra Pradesh as soon as possible, as well as financial allocation.