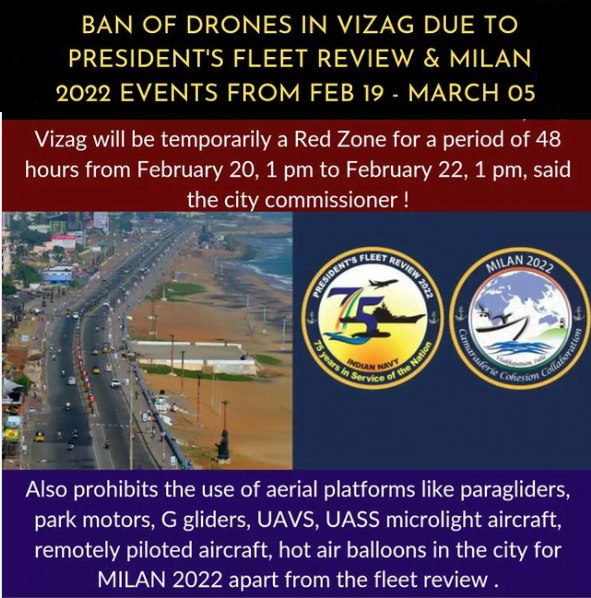 Drones and other flying platforms will be prohibited from being flown during the President’s Fleet Review (PFR) and MILAN 2022, according to Visakhapatnam City Police Commissioner Manish Kumar Sinha. This will take effect from 1 p.m. on February 20 to 1 p.m. on February 22, in order to protect VIPs and VVIPs from threats from above. As a result, the Visakhapatnam City Police jurisdiction has been placed under a temporary red zone. This has been implemented in order to protect the general public, dignitaries, and VIPs from any criminal or terrorist acts that could jeopardise their safety.

Commissioner Sinha further stated that from 12 p.m. on February 19 to 12 p.m. on March 5, 2022, the use of any airborne vehicles, including drones, hot air balloons, paragliders, Unmanned Aerial System Services (UASS), Unmanned Aerial Vehicles (UAVs), and remotely piloted aircraft, will be outlawed. Because of security concerns during the PFR and MILAN 2022, Visakhapatnam City Police have issued a drone prohibition.

The district officials declared earlier this week that fishing will be prohibited during the President’s Fleet Review and MILAN 2022. From February 19 to March 4, 2022, fishermen in the Visakhapatnam District have been told not to take their boats out to fish. Any fishing or civilian boats are absolutely barred from approaching anchored naval ships.

Roads are being fixed in addition to these preventive measures to ensure smooth traffic flow throughout the activities. The Greater Visakhapatnam Municipal Corporation (GVMC) is responsible for the city’s repair and beautification. The Visakhapatnam District Collector has directed that the arrangements for the PFR and MILAN be properly monitored, as the city would be graced by many dignitaries from the Central Government.

The Indian Navy’s Eastern Naval Command is preparing to host the PFR on February 21, 2022, and MILAN from February 25 to March 3, 2022, at Visakhapatnam.