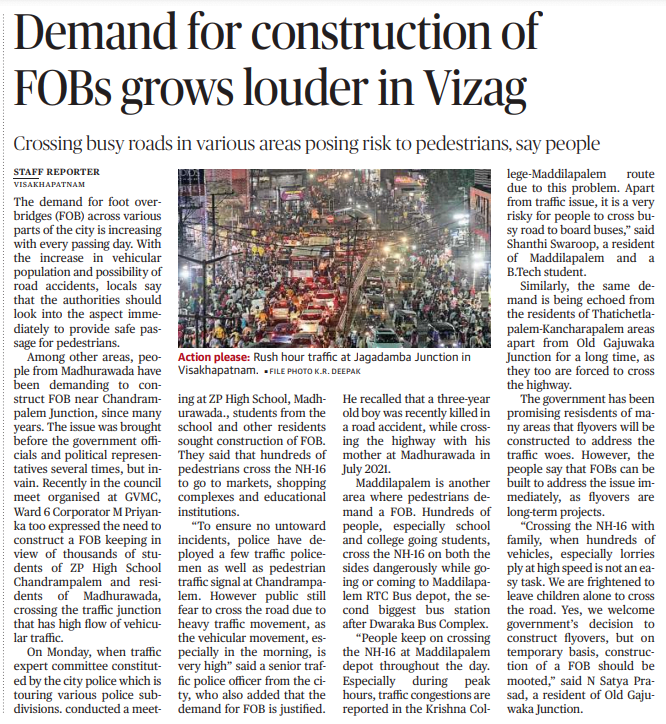 With each passing day, the need for foot overbridges (FOB) in various regions of the city grows. With the rise in vehicle traffic and the potential for road accidents, residents say the government should look into the issue right once to ensure that pedestrians have a safe passage.

People from Madhurawada, among other places, have long demanded the construction of a FOB near Chandrampalem Junction. Several times, the subject was raised before government officials and political figures, but to no avail. Ward 6 Corporator M Priyanka recently raised the need for a FOB during a council meeting held at GVMC, citing the hundreds of students from ZP Significant School Chandrampalem and inhabitants of Madhurawada who cross the traffic intersection, which has a high volume of motor traffic.

When a traffic expert group formed by the city police had a meeting at ZP High School in Madhurawada on Monday to visit several police subdivisions, students from the school and other locals demanded the building of a FOB. Hundreds of pedestrians are known to cross the NH-16 on their way to markets, shopping malls, and educational institutions.

“Police have positioned a few traffic cops as well as a pedestrian traffic signal near Chandrampalem to guarantee no untoward incidents.” However, the public is still afraid to cross the road because of heavy traffic, especially in the morning,” said a senior traffic police officer in the city, who also acknowledged that the need for FOB is reasonable. In July 2021, he recalled, a three-year-old kid was murdered in a vehicle accident while crossing the highway with his mother in Madhurawada.

Another location where pedestrians desire a FOB is Maddilapalem. Hundreds of people, mostly school and college students, cross the NH-16 on both sides of the highway in a risky manner on their way to or from Maddilapalem RTC Bus Depot, the second largest bus station after Dwaraka Bus Complex.

“Throughout the day, people continue to cross the NH-16 at Maddilapalem depot. Traffic congestion has been recorded on the Krishna College-Maddilapalem route, particularly during peak hours. Apart from the traffic issue, crossing a busy road to board buses is quite dangerous,” said Shanthi Swaroop, a Maddilapalem resident and B.Tech student.

For a long time, residents of Thatichetlapalem-Kancharapalem areas, away from Old Gajuwaka Junction, have echoed the same demand, as they, too, are obliged to cross the highway.

Residents in several places have been promised that flyovers will be built to alleviate traffic congestion. People, on the other hand, claim that because flyovers are long-term projects, FOBs may be created right once to remedy the problem.

“It’s not simple to cross the NH-16 with your family when hundreds of vehicles, particularly lorries, go by at fast speeds. We’re afraid to let kids cross the street alone. Yes, we applaud the government’s intention to build flyovers, but development of a FOB should be considered on a temporary basis,” stated N Satya Prasad, an Old Gajuwaka Junction resident.