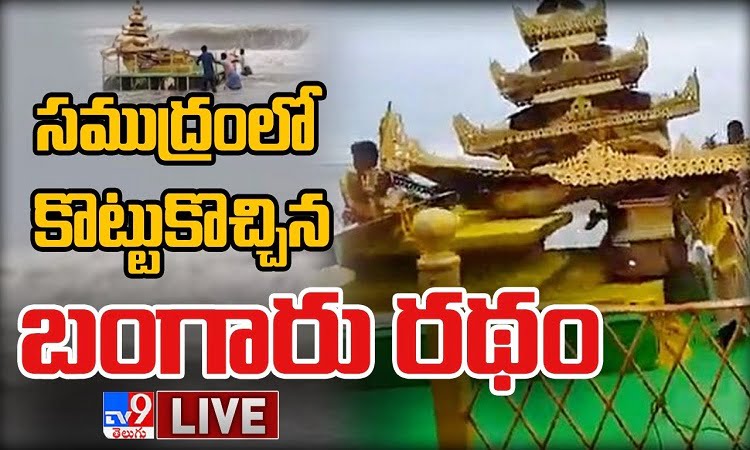 A golden chariot washes up on the shore of Andhra Pradesh, and a video of it has surfaced

While an inquiry is underway, it is assumed that the edifice belongs to a monastery from a Southeast Asian country such as Thailand or Indonesia.

On Tuesday, May 10, residents of villages along the Sunnapalli coast in Andhra Pradesh’s Srikakulam district were surprised to find a gold-painted chariot washing up on the beach. The chariot appears to have washed up from Thailand or Myanmar, and fishermen and officials believe it was washed ashore as a result of Cyclone Asani’s high tidal waves.

The chariot structure is seen floating to the shore among the heavy waves of the Bay of Bengal in footage from the incident. Ropes were fastened around it and carried to shore with the help of local fisherman for further examination. Several inhabitants from nearby villages had gathered on the beach to see the chariot float into the water.

The construction is thought to be from a monastery in a southeast Asian country near the Andaman Sea, such as Myanmar, Thailand, Malaysia, or Indonesia. A case has been filed, and an inquiry into the origins of the construction is underway.

While many people believe the chariot came from a foreign temple, Santabommali district officials informed The Times of India that it could have come from closer to home. According to Tehsildar J Chalamayya, it could have been utilised as a prop for filming along the east Indian coast and washed up at Srikakulam due to Cyclone Asani’s effects.

For the previous few days, Andhra Pradesh has been drenched by the storm. Coastal Andhra Pradesh was placed on high alert on Tuesday, May 10 due to a major cyclonic storm. In the Krishna, Guntur, Kakinada, Konaseema, West Godavari, East Godavari, and Visakhapatnam districts, severe to very heavy rains are expected.

Gusty gusts of 75-95 kilometres per hour are expected along the shore. The administrations have set up control rooms in the districts that are likely to be affected. The public has been notified in coastal and low-lying areas.

#Asani #CycloneAsani Power of Mother Nature: A gold painted chariot – may be from Japan, Thailand, Cambodia, Malaysia or Indonesia – has washed to the shores of #Srikakulam district in #AndhraPradesh. During an earlier cyclone, the sea was spewing gold pellets in #EastGodavari pic.twitter.com/knTDrTQvGg