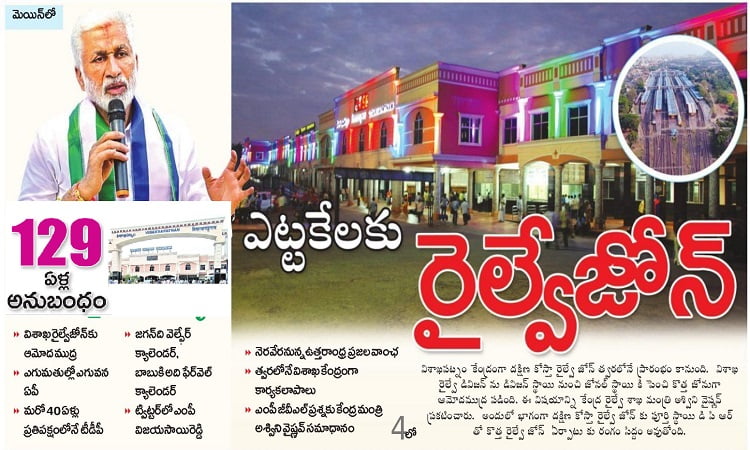 The new South Coast Railway (SCoR) zone, with its headquarters in Visakhapatnam, has been authorised by the Central Government, according to Union Minister of Railways Ashwini Viashnaw. The proposed zone, which the Centre promised following the bifurcation of Andhra Pradesh, was inaugurated in 2019.

Despite the fact that the Union Budget for 2020-21 included Rs 170 crores for the establishment of SCoR, the actual activity has yet to begin. When questioned about it by BJP MLA GVL Narasimha Rao, the Union Minister responded favourably, stating that the SCoR zone will be operational shortly.

Minister Ashwini Vaishnaw also stated that the site for the SCoR head office has been selected, and that he has asked officials to accelerate the land survey, office layout planning, staff quarters planning, and other related tasks. The new South Coast Railway zone was sanctioned after the reorganisation of the East Coast Railway (ECoR) and South Central Railway (SCR) zones, with its headquarters in Visakhapatnam.

The Waltair Division, which is part of the ECoR, will be decommissioned, according to the minister. The Railways Minister announced in the Detailed Project Report (DPR) that a new railway division will be built at Rayagada. The Ministry of Railways has also constituted an advisory council of senior officials to help with the project’s progress.