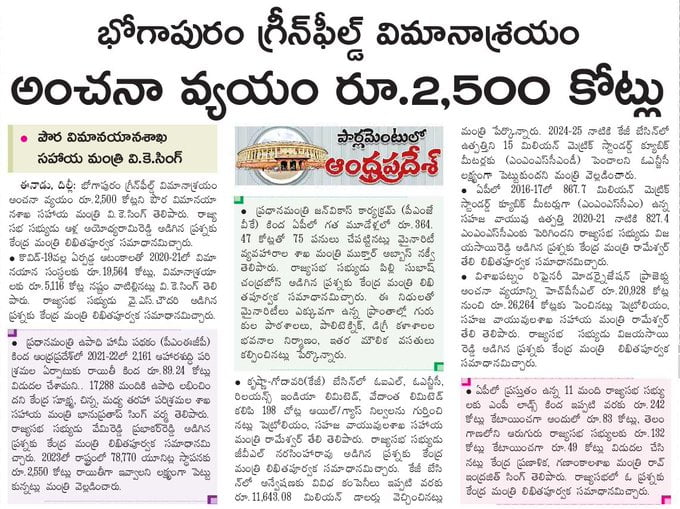 The cost of the Bhogapuram Greenfield Airport is expected to be Rs 2,500 crore. K. Singh expressed his thoughts. A question from Rajya Sabha member Alla Ayodhya Ramireddy was answered in writing by the Union Minister. Airlines would be paid Rs 19,564 crore, with a loss of Rs 5,116 crore due to Covid-19. K. Singh has been notified. YS Chaudhary, a Rajya Sabha member, asked the Union Minister a question, which he answered in writing.

Under the Prime Minister’s Employment Guarantee Scheme (PMEGP), Rs.89.24 crore has been released under subsidy for setting up of 2161 food processing industries in Andhra Pradesh by 2021-22. Assistant Minister Bhanupratap Singh Verma said.Rajya Sabha member Vemireddy Prabhakar Reddy asked the Union Minister to give a written reply to the question. The minister said the target was to subsidise Rs 2,550 crore for setting up 78,770 units in the state by 2023.

Union Minister Rameshwar Teli in a written reply to a question by Rajya Sabha member Vijay Yasaireddy said that natural gas production in AP has increased from 867.7 million metric cubic meters (MMS CM) in 2016-17 to 827.4 MMS CM by 2020-21.

The cost of the Visakhapatnam Refinery Modernization Project has been increased by HPCL from Rs 20,928 crore to Rs. Rameshwar Teli, Minister of State for Petroleum and Natural Gas, said the increase brought the total to Rs 26,264 crore. A query from Rajya Sabha member Vijayasai Reddy was answered in writing by the Union Minister.