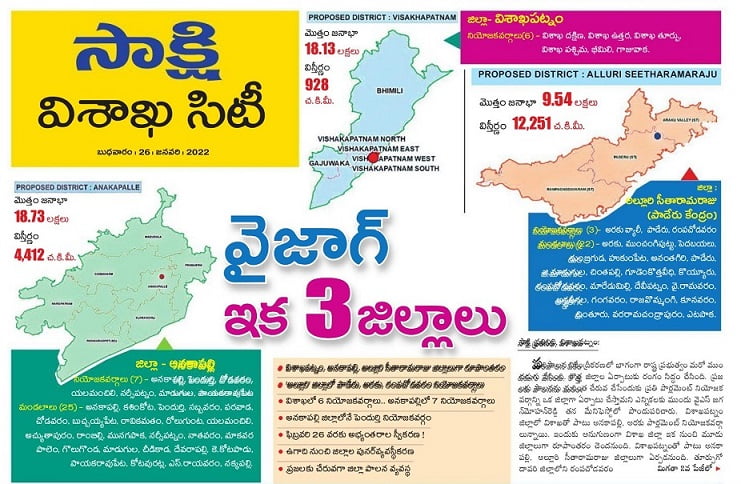 On the basis of the current parliamentary constituencies, the existing 13 districts in the state of Andhra Pradesh have been reorganised into 26 districts. In forming the new districts, the geographical boundaries were taken into account. The State Government of Andhra Pradesh has issued a notification under Section 3 of the Andhra Pradesh Districts Act, 1974, Subsection 5 of Section 3.

The State Government made this choice in the interest of better administration and development in concerned areas. As a result, power will be decentralised and administration will be brought closer to the people. Visakhapatnam has been partitioned into three new districts by the state government of Andhra Pradesh.

Anakapalle District will now span 4,412 square kilometres. In terms of population, it will continue to be the largest (according to the 2011 census Anakapalle has a population of 18.73 lakhs). The new Anakapalle District will encompass areas like as Madugula, Devarapalle, Kasimkota, Rambilli, Munagapaka, Atchutapuram, Chodavaram, Pendurthi, Paravada, Sabbavaram, and Narisipatnam. There will be two new revenue divisions in each of the newly established districts.

On January 25, 2022, the Chief Secretary of the Andhra Pradesh State Government had a video conference with Dr. A Mallikharjuna IAS, the Visakhapatnam District Collector, to discuss the formation of additional districts. In this context, the Collector stated that he has agreed to the formation of new districts. As a result, a study documenting the new districts’ geographical and natural attributes, as well as education, medical facilities, revenue, and other factors, was prepared. The formal formation procedure has yet to commence.

The Andhra Pradesh State Government has brought village and ward secretariat management to the forefront of the people’s minds. The district administration system will be closer to the people as a result of the recent decision. From Ugadi 2022 forward, the new regulation will be in effect. The government had already created a committee on the formation of new districts, led by a Chief Secretary.

The committee had travelled the length and breadth of the state, noting the geographical and natural features of the areas as well as cultural attitudes. The government has received a report as a result of this. All of the people and organisations’ objections will be taken into consideration. Following that, these objections will be investigated and solutions will be developed.