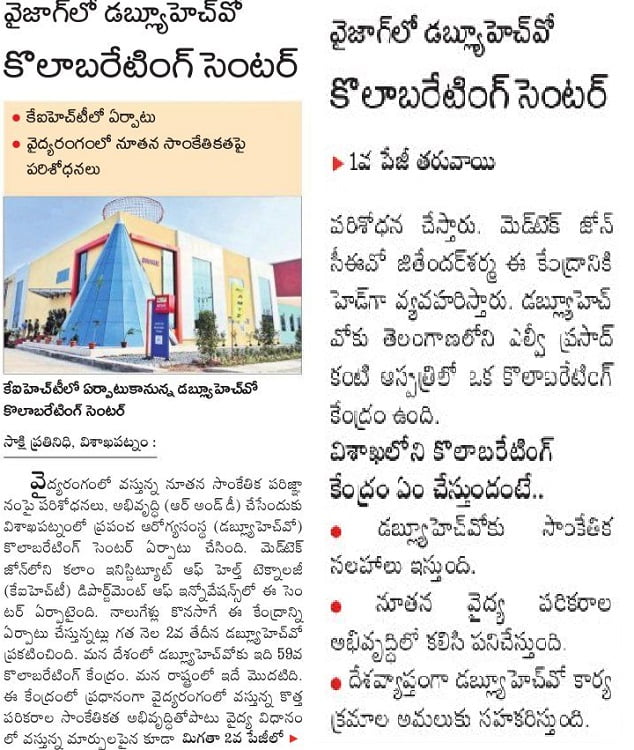 The Kalam Institute of Health Technology (KIHT) in Visakhapatnam’s Andhra Pradesh MedTech Zone (AMTZ) has been designated as the state’s first WHO collaborating centre (WHO-CC) for innovations. It will also be the United Nations’ first office in Andhra Pradesh. The WHO-CC will report directly to the WHO headquarters in Geneva, and will work to accelerate the development and global deployment of health breakthroughs and new technology. Jitendra Sharma, Director of the AMTZ, will lead the WHO-CC for Innovations.

As part of the Make in India drive, KIHT, a Union government project of the department of biochemistry, was launched in July 2017. It focuses on medical device research and development, as well as medical technology exports, in order to assist policymakers, research institutions, and knowledge repositories. Its purpose is to expand people’s access to low-cost health items.

A WHO Collaborating Centre is an organisation designated by WHO’s Director-General to be a part of a worldwide collaborative network established by WHO to assist its programmes at the national, international, regional, interregional, and global levels. In support of national health development, a WHO collaborating centre also contributes to the enhancement of country resources in terms of information, services, research, and training. The center’s initial term will be four years.