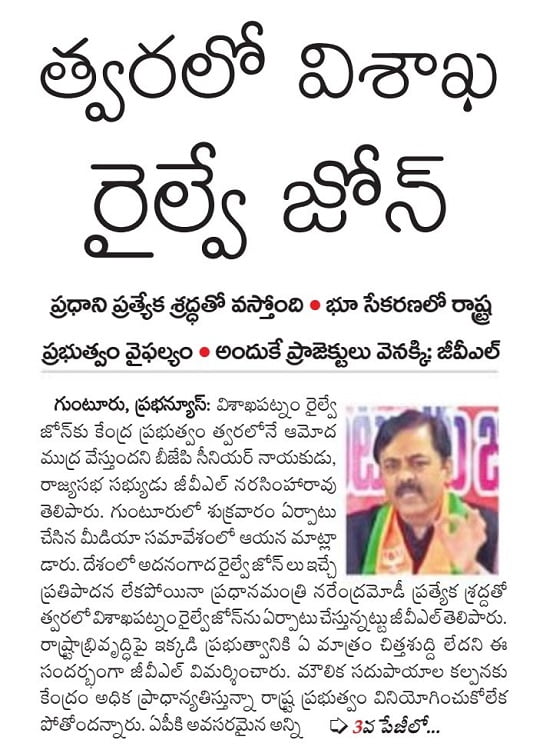 BJP Member of Parliament (MP) GVL Narasimha Rao stated at a conference in Guntur that the Central Government is prioritising the Visakhapatnam Railway Zone proposal given by the Andhra Pradesh State Government. Narendra Modi, India’s Prime Minister, is committed to bringing the new South Coast Railway (SCoR) zone, with its headquarters in Visakhapatnam, up to speed, as he promised. The MP stated that the Central Government has already approved a large sum of money for Andhra Pradesh’s development.

MP Narasimha Rao is hopeful about the SCoR, which is based in Visakhapatnam, and believes it would be fully operational shortly. He described Nitin Gadkari’s recent visit to Andhra Pradesh as a sign of the central government’s support for the state. Nitin Gadkari, the Union Minister for Road Transport and Highways, visited Andhra Pradesh earlier this week and launched multiple projects totaling more than Rs. 3 lakh crore.

He had sanctioned 30 rail over bridges as part of this (ROBs). The cash sanctioned by the central government will be used to improve roads in the state. The Visakhapatnam-Raipur Greenfield Express Highway will be operational shortly, and the state has also approved many Multi-Modal Logistics Parks (MMLP).

He stated that the state government of Andhra Pradesh should focus on land acquisition for the National Highway, railway, and other development projects, and then pass over these properties to the central government. Speaking on the state’s recent infrastructure development, the MP stated that the highway expansion has doubled under the present administration.

In 2019, the South Coast Railway (SCoR) zone was announced, with Visakhapatnam as its headquarters. The SCoR is organised into four divisions: Waltair, Vijayawada, Guntur, and Gunthakal. This newly created zone has not yet been operationalized, but it is expected to be operational soon.