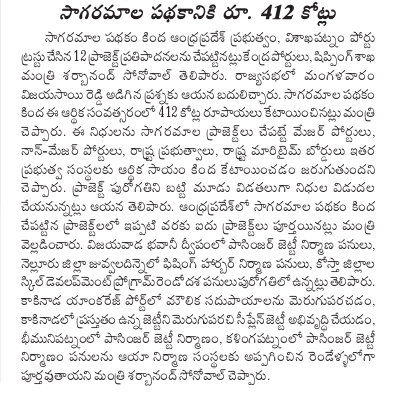 The Andhra Pradesh government has taken up 12 project ideas submitted by the Visakhapatnam Port Trust under the Rs 412 crore Sagarmala scheme, according to Union Ports and Shipping Minister Sharbananda Sonowal. On Tuesday, he was responding to a question from Vijayasai Reddy in the Rajya Sabha. This financial year, Rs 412 crore has been allotted under the Sagarmala scheme, according to the ministry. He stated that the monies would be distributed through financial assistance to big and minor ports, state governments, state maritime bodies, and other government organisations working on Sagarmala projects.

He stated that the funds would be released in three instalments, depending on the project’s development. According to the minister, five of the Sagarmala scheme’s projects in Andhra Pradesh have been completed thus far. He said work on the second phase of the Coastal District Skill Development Program was underway, including passenger jetty construction at Bhavani Island in Vijayawada and fishing harbour construction in Nellore District Juvvaladinne.