12 additional flyovers To be built in Visakhapatnam 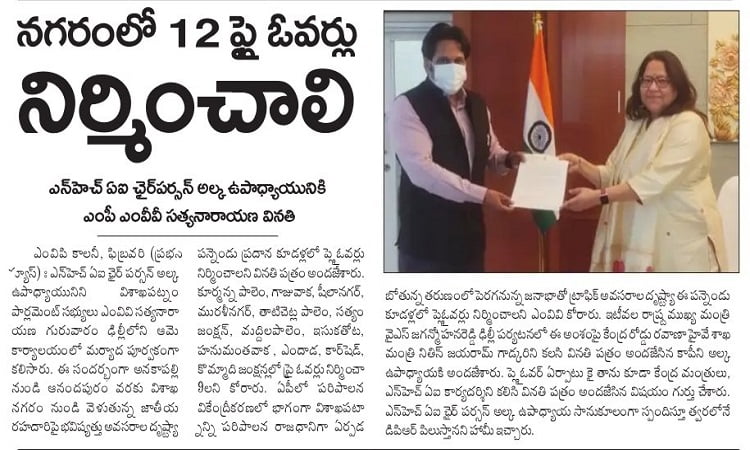 In the recent past, Visakhapatnam’s roads have seen considerable increase in traffic. Commuters are frequently caught in traffic jams that last several minutes at numerous junctions throughout the city. To address this problem, a number of flyovers have been constructed throughout the city to help with traffic flow. The construction of a flyover at the NAD Junction was recently finished, making life easier for people who commute regularly in the area.

MVV Satyanarayana, a Member of Parliament (MP) from Visakhapatnam, has written to the Chairperson of the National Highway Authority of India (NHAI), Alka Upadhyaya, requesting the building of twelve additional flyovers in Visakhapatnam to relieve traffic issues. These twelve flyovers are proposed along National Highway 16 (NH-16), from Anandapuram Junction to Anakapalli, at some of the busiest roads. This project for the construction of flyovers will be the subject of a full report, and bidders will be sought.

Many educational institutions, commercial offices, hospitals, malls, and other sites line the roadway linking Satyam Junction and Anandapuram. Apart from being commercial hubs, Yendada, Madhurawada, Maddilapalem, and other places near the highway are some of the city’s most densely populated residential regions. Due to these circumstances, the route sees a lot of traffic throughout the day’s peak hours.

Many heavy vehicles pass via the Muralinagar, Sheelanagar, Gajuwaka, and Kurmannapalem intersections throughout the day and night. Many industries, Special Economic Zones (SEZs), and the Information Technology (IT) SEZ are located in these areas. Because the Visakhapatnam International Airport is close to Sheela Nagar, this area sees a lot of traffic. The Visakhapatnam MP has proposed a plan to build flyovers between Anandapuram Junction and Anakapalli, taking into account all of these factors.

Previously, proposals for the construction of flyovers across various junctions in Visakhapatnam were sent to the National Highway Authority of India (NHAI). Lankelapalem, Duvvada, the Steel Plant’s main gate, Gajuwaka, Thatichetlapalem, Akkayyapalem, Gurudwara Junction, Maddilapalem, Yendada, and Madhurawada Junctions were earlier suggested for flyover construction in 2019. A metro rail project was also proposed as a more efficient and speedier mode of transportation around the city.